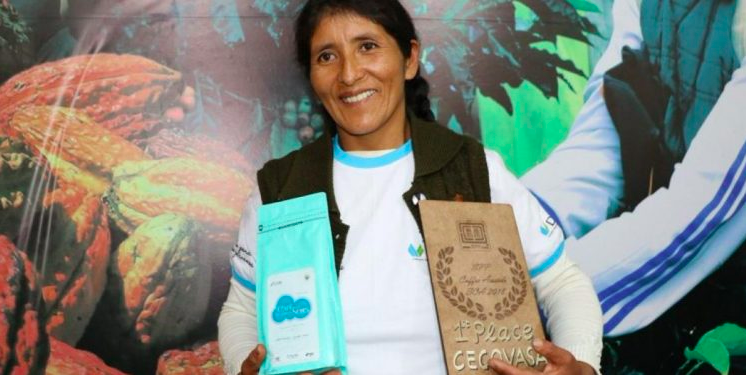 An award-winning coffee has put Peru’s Puno region on the world map.

Coffeemaker Vicentina Phocco Palero from the Sandia province of Puno won the small producer category for the world’s best coffee. She works with the Túpac Amaru co-op in that province in southern Peru.

According to the state’s Andina news, Phocco also received funding from the National Commission for Development and Life Without Drugs (Devida) and the local Municipality of Distrital de Alto Inambari. These two public entities helped fund the harvesting process and provide the Quechua brand with coffee equipment.

The brand Quechua is under the operating umbrella of the Central Coffee Cooperative of the Valleys of Sandia (Cecovasa). Last year, this same co-op won a similar prize in the same Global Specialty Coffee Expo with the brand Tunki.

“Puno is one of the coffee world’s best-kept secrets,” raves The Coffee Shrub blog. “Primarily because Peru seems to be a neglected origin by coffee buyers but even the ones who do make the effort rarely have enough gas in the tank to make it out to the far reaches of coffee country that borders Bolivia.”

The Sandia Valley, known for producing some of the world’s best coffee, has recently been at the middle of an economic struggle as the drug trade and cocaine production hold firm grips over the town’s agriculture. In a startling report from Mongabay, the number of coffee growers in the region is in some parts just 10 percent of what it was a few years ago as the producers struggle to make enough money to live, and often instead opt for alternatives like coca production.

Because of noticeably dwindling yields in recent years, different NGOs and public organizations are working to try and provide alternative options besides coffee-farming to local people in Puno.