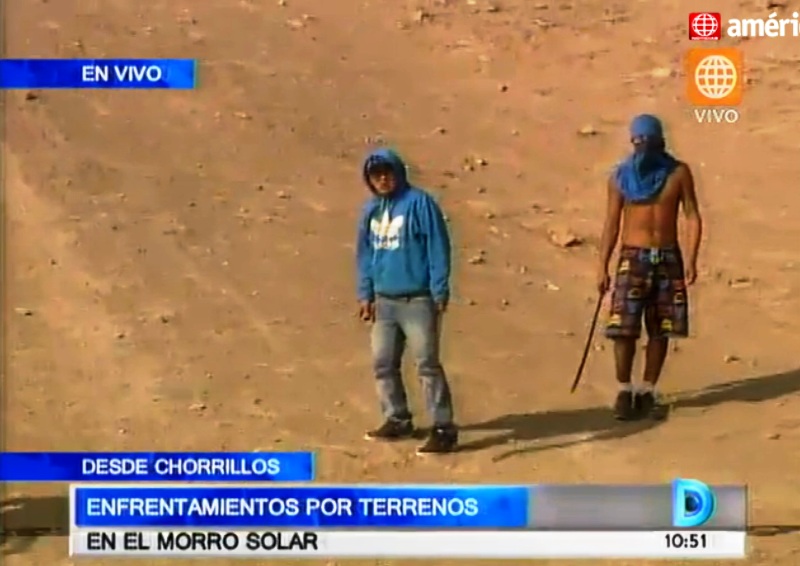 Competing squatter gangs fought for land near a historic battle memorial in the south of Lima last week.

Three weeks ago, over 1,000 squatters sectioned off small plots of land in 80 acres of empty space near the Morro Solar tourist site in Lima’s southern district of Chorrillos. After the squatters had occupied their chosen plots in tents for a week, the government negotiated their peaceful withdrawal supervised by over 500 police.

On May 31, just four days later, two gangs numbering over 150 combined invaded the area again. Armed with machetes and slings for launching rocks, the two sides fought over the turf in what ended in a stalemate on an early Sunday morning. The five police officers who responded could not control the mobs. After an hour, seven more police in riot gear arrived and dispersed the crowd with tear gas.

The gangs attempted to take the land again that night, but a larger police contingent which had been dispatched to defend the land repelled the mob, arresting three who were reported to be gang leaders.

Such land grabs are known as “invasions” in Peru. Many invasions have resulted in “young towns” or shantytowns being built. Many of these shantytowns have become formalized by the state. With a population of 400,000, the largest and most well-known is Villa El Salvador on the southern outskirts of the city. In recent years the invasions are led by land-trafficking mafias.

Peru’s culture ministry has announced it will implement a plan to protect Peru’s cultural heritage sites from land invasions, but did not offer specifics. “While some people appear to be involved in the invasion, others have told us of suspicious activities and between them we’re looking for allies to better protect the Morro,” said Blanca Alva, director of the culture ministry’s cultural heritage defense division.

The Peruvian government declared Morro Solar a cultural heritage site in 1986 to commemorate the Battle of San Juan and Chorrillos in the War of the Pacific against Chile. The site features a planetarium, the Unknown Soldier monument and the Jesus of the Pacific statue overlooking the ocean.

Just one week prior to the Morro Solar invasion, Lima police fought to dislodge a gang of over 400 from the Tablada de Lurin site near Villa Maria del Triunfo. Tablada de Lurin is a 2,000-year-old network of pre-Inca stone tombs and one of the oldest sites in Peru.