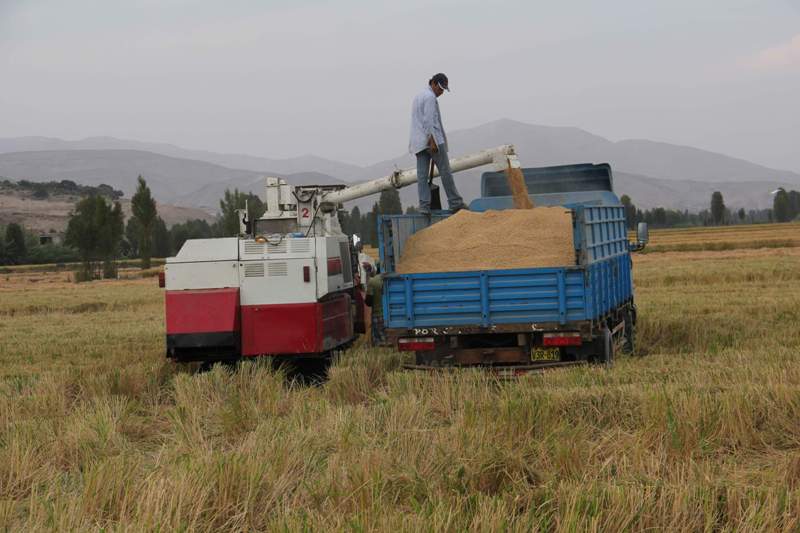 Protest leaders have announced a 10-day break in the indefinite strike against the Tia Maria copper mine project so farmers can harvest rice fields.

Farmers began clearing the fields with rice reapers on Monday. The harvesting is done in two shifts. While one group blocks roads of Cocachacra and other towns in the Tambo valley, the other group works the fields. However peace has temporarily returned to the towns which saw violent protests and daily clashes with police.

The current rice crop in the Tambo valley in Islay province has been ready to harvest for almost a month. Last month Arequipa’s regional agriculture minister warned that if the rice were not harvested by today, it could be lost. La Republica spoke with one farmer who lost a large part of his crop from the delay.

Cornejo and other opposition leaders have stated that, despite the dates falling during the 10-day pause, farmers will join the multiregional two-day strike scheduled for May 27 and 28.

Congressional president Ana Maria Solorzano, who represents Arequipa, took advantage of the peace to call meetings with Arequipa governor Yamila Osorio, regional mayors from Islay province and protest leaders to plan the return of classes for 12,878 children who have not attended school during most of the 59 days since an indefinite strike was called against the $1.4 billion mine.

“There is great worry that if they don’t start classes here in two or three days, then 12,878 students throughout the province will lose the school year,” Solorzano said.

The Tambo valley farmer’s break in the indefinite protest comes just after Southern Copper announced a “pause” in construction of the copper mine, which had not begun yet, in order to open dialogue with local residents. The company’s announcement came after violent protests in the regional capital of Arequipa.

President Ollanta Humala deployed the Peruvian military to restore order in Islay province last week after protesters killed a police officer. Indefinite protests which began March 23 have led to three deaths and over 200 injuries. Negotiations have failed twice. Local farmers concerned for the environment have demanded that Southern Copper abandon the $1.4 billion copper mine. Three died in Tia Maria protests in 2011.