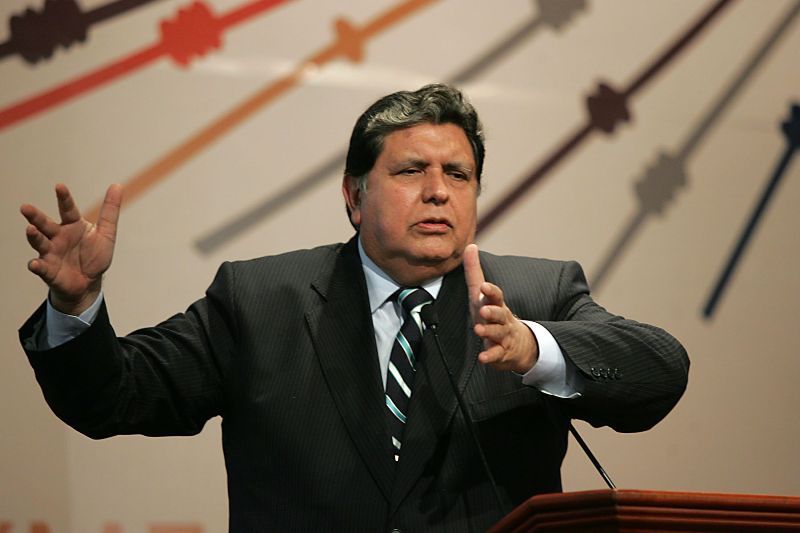 In 1979, Garcia was elected to Peru’s Congress as a member of the APRA party. He served as the party’s secretary general between 1982 and 1985.

At the time, the Latin American debt crisis gripped the major economies of the region. Governments throughout the region failed to service public debt among rampant inflation. Just before Garcia took office, the Peruvian sol had been scrapped in favor of the inti, which would be scrapped soon after he left office for the nuevo sol.

Garcia capped debt payments at 10% of GDP, refusing to pay global creditors any amount above the limit. The move had a temporary economic benefit, but ultimately isolated Peru from the international finance community. The country suffered hyperinflation from 1988 to 1990, with the peak monthly rate reaching 400% in September 1990.

The Shining Path guerrillas’ first act of violence occurred in 1980. By the time Garcia assumed office in 1985, the insurgency had devolved into a full-scale dirty war with atrocities committed by both the rebels and military forces.

When Garcia left office in 1990, Peru averaged 2,000% annual inflation and the Shining Path were carrying out regular activities and attacks in Lima. His five-year term was marked by financial crisis and an increasingly bloody insurgency by the guerrillas.

In April 1992, President Alberto Fujimori dissolved Congress and consolidated power in a self-coup. Fujimori announced a corruption investigation into Garcia which prompted the former president to go into exile. Garcia lived in Colombia for over eight years, returning only after internal pressure forced Fujimori’s resignation.

Garcia ran for president in the ensuing election but lost to the former World Bank and United Nations economist Alejandro Toledo.

In 2006, Garcia stood again and beat Ollanta Humala to be elected president of Peru for a second five-year term.

Garcia’s second term was markedly different from his first. The new advocate of the market economy oversaw Peru average 7% GDP growth during a commodity boom, the fastest in Latin America, while inflation was kept under 3%. The percentage of Peruvians living in poverty was reduced from over 48% to 28%.

While Garcia enjoyed a peak in commodity prices – which Peru benefited greatly as a global producer of copper, silver and gold – economists credit Garcia for continuing the fiscal discipline and open trade policies of his two predecessors, Fujimori and Toledo.

Criticisms of Alan Garcia’s second presidential term include the country’s re-emergence as the world’s top cocaine producer, having surpassed a decades-long reign by Colombia, and rising crime rates.