Over 160,000 take to the streets in the annual pro-life march in Arequipa 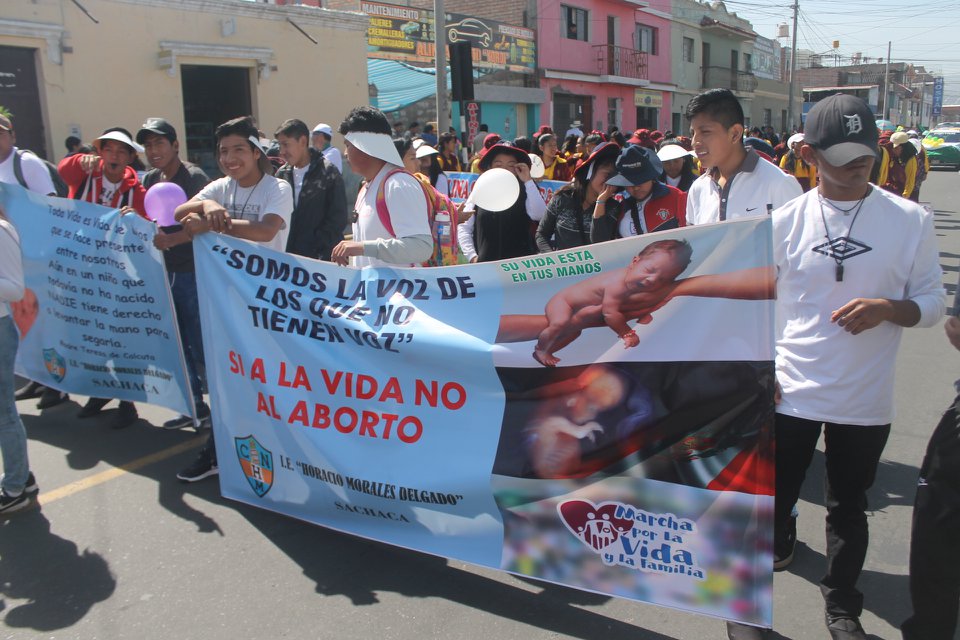 For the 12th consecutive year, the Parade for Life and Family took place Saturday in Arequipa to condemn abortions and the use of anti-contraceptives.

La Republica reported that over 160,000 people participated in Peru’s second city, meeting at 9 a.m. and finishing around 11.30 a.m with banners, songs and dances. The demonstration was organized by the National Organization for Life (CORVIDA) to celebrate the International Day of the Unborn Child, which takes place on March 25th every year.

Neldy Mendoza de Chavez, the spokesperson for CORVIDA, told Diarios sin Fronteras that the Peruvian society should put aside the differences that separate them, emphasizing that life has the same value in whatever form it takes. She also spoke against feminism, warning of its negative impact on women.

“South American women want to have children, they want to take care of them, watch them grow, accompany them in their childhood and adolescence and enjoy, ultimately, their family life,” she told the newspaper. “But social pressure leads them to hide their motherhood, to delay it, to conceal their maternal calling and it causes them to show that children prevent them from being ‘equal to men.'”

The slogan for this year was ‘United for the good of Peru’ to support the feeling of positivity and new beginnings marked by new President Martín Vizcarra.

Families, children and teenagers all took part in the traditionally Catholic event, which was also attended by the Archbishop of Arequipa. Diario Correo reported that the Catholic figure highlighted the Pope’s stance on the importance of life.

“The Pope Francisco is constantly saying that it is important that we all take value from life,” he told the paper. “These days life can be discarded very easily, and the Church always wants to spread this message.”

Catholicism is easily the most predominant religion in the country, with a 2014 survey by CPI of five urban regions of the country reporting that 77% of the population professed this religion. However, this is in decline, as the INEI Census in 1993 stated that 89% of the country was Catholic, and in 2007 this number had lowered to 81%.

The declining number of the religious population could be linked to the rise of feminist and LGBTQI+ movements in the last few decades, which are often polemic within the country due to their flagrant opposition to the Catholic church.

The march caused mass traffic jams and unrest amongst the non-participating people of Arequipa. The president of CORVIDA, Guadalupe Sanchez told La Republica that this was an unfortunate necessity.

“If a couple of people from the gay lobby go out and march: ‘Wow! Huge LGBT crowd marches to defend their rights to marrying someone of the same sex,’” he said. “I want people to realise that we are hundreds of thousands of people who have come out to defend life and family. And if that bothers anyone, I’m sorry.”

With over 160,000 people taking to the streets last Saturday, it’s clear that religious beliefs still have a strong hold on many people and traditional family roles along with the sanctity of life of an unborn child are extremely important for society.