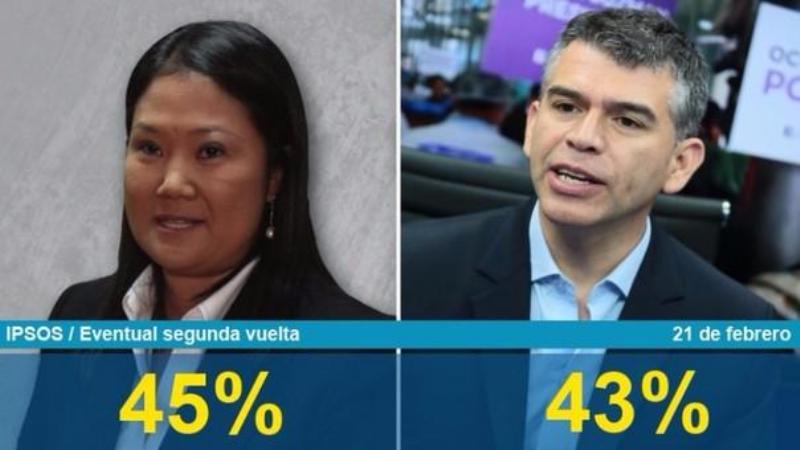 The Ipsos poll published in El Comercio on Sunday showed Keiko Fujimori would receive 30% of the vote, followed by Julio Guzman with 18%, Pedro Pablo Kuczynski with 9%, Cesar Acuña with 6% and Alan Garcia with 5%.

Julio Guzman is currently appealing rulings from Peru’s elections board which would bar him from the ballot next April. If he is not approved to run for president, 17% of the voters who said they would vote for him would switch to Kuczynski. Fourteen percent would vote for Fujimori, 13% for Acuña, 12% for Veronika Mendoza and 10% for Alfredo Barnechea.

The poll also showed that the allegations of plagiarism and piracy continue to erode support for Cesar Acuña, who polled as high as 13% last December before a wave of scandals emerged which may have doomed his candidacy.

In a field which was entirely comprised of center-right candidates, the liberal Veronika Mendoza and left-center Alfredo Barnechea could ascend to the top five if Guzman or Acuña were disqualified.

Daniel Urresti, the candidate for the ruling Peruvian Nationalist Party, slipped into the poll’s “Others” category to share 3% of the vote among eight other candidates.

The poll contradicted other surveys’ findings that Peru’s voters are looking for somebody from outside the political establishment to take over the government in 2016. When asked about how much experience the next president should have, “much experience” was the top answer with 40%, followed by “some experience” with 23%. Twenty percent want a president who is “fairly new to politics” while only 14% want somebody “totally new.”

Fifty-four percent of voters have already decided who to vote for in 2016 elections. Just over a fifth are still deciding between two to three candidates, and 12% say they do not know enough about the candidates.