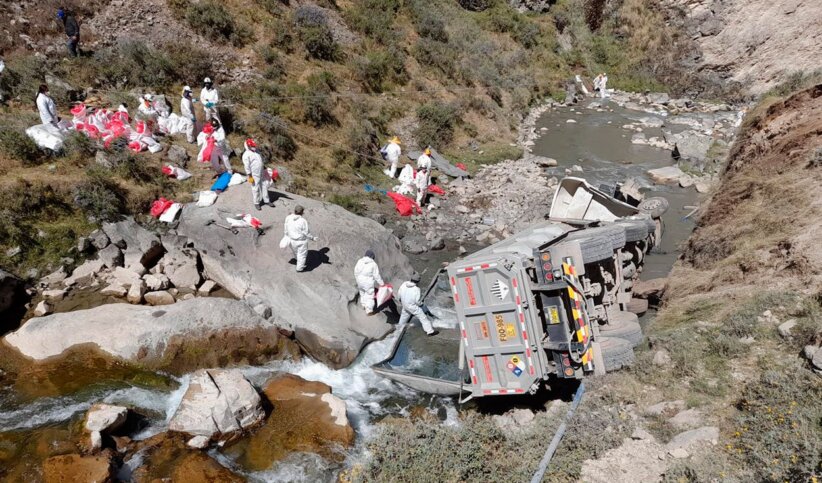 The incident happened on June 13 after a truck overturned and spilled its cargo in the river basin, in Canta’s city, located in the Sierra de Lima. The truck belongs to the Huari Service company, a subcontractor of the Volcan mining company.

On June 15, the mining company issued a statement, in which it “deeply regretted the accident” and assured financial compensation for trout producers.

“Regarding compensation for trout production, we have closed an agreement with one owner and we are in the advanced process with another two,” said the mining company.

“Since this unfortunate incident occurred, we have deployed, in coordination with the transport company, heavy machinery and duly trained personnel to collect the mineral and clean up the area where this event occurred last Monday,” added the company.

Volcan also reportedly built retention dams so the Zinc sediment would not be washed down the river.

The statement was published after the residents of Canta protested against the companies responsible for the ecological disaster. They blocked the Lima-Canta-Huayllay national highway for four hours to demand that the President Pedro Castillo’s administration solve the environmental damage and compensate those affected.

The Public Ministry has already opened an investigation for the alleged crime of environmental contamination against Volcan’s subcontractor company and against those who are responsible.

The state-owned water utility Sedapal said in a statement that the zinc spill does not affect the production of drinking water for the population of Lima’s northern districts, since the supply at this time of year is from underground water sources.

For its part, the Ministry of Health recommended that water from the spill area not be used for irrigation of farms and crops. Likewise, it prohibited its use for the consumption of domestic animals or livestock.

Kiwibot rolls into Peru to disrupt advertising with autonomous robots