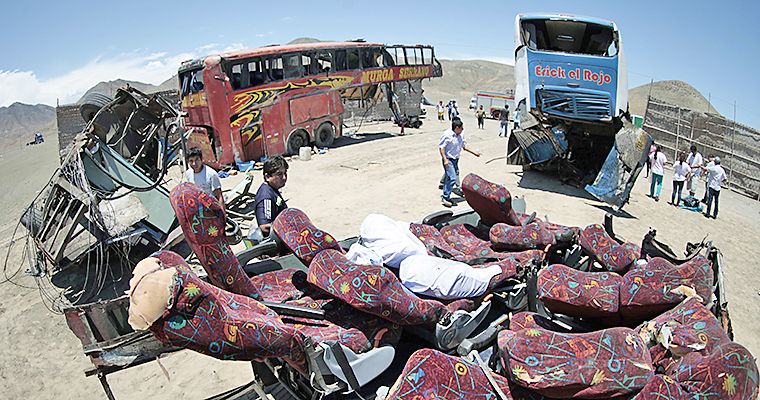 A four-vehicle accident in northern Peru yesterday has left 38 dead and 84 injured.

At around 4 a.m. on Monday morning, a passenger bus veered into oncoming traffic and collided head-on with another bus. A third bus and a refrigerated truck crashed into the two buses at high speed, cutting the first bus into three parts. The accident occurred on La Panamericana Norte highway in the town of Huarmey, Ancash department, about 200 miles north of Lima.

The number of deaths may continue to rise due to the serious injuries of victims still receiving treatment. Injured passengers were transferred by helicopter to hospitals in Chimbote and Callao. Many of the victims were children.

Some reports indicate the driver of the first bus, operated by Murga Serrano, fell asleep at the wheel. But other witnesses told authorities that a fifth truck blocked the Murga Serrano bus’ path, forcing it to drive on the wrong side of the road. Witnesses say there was a side collision, and the fifth vehicle is being sought by police.

The Murga Serrano bus was travelling at 75 miles per hour when it smashed head-on into a bus operated by Erick El Rojo. The third bus was operated by Challenger.

“A refrigerated truck moving at high speed hit the Murga Serrano bus and cut it in three pieces, then continued advancing and hit the back of the Erick El Rojo bus, and then the Challenger,” said a specialist in Peru’s transit accidents authority. He added that the truck caused many of the deaths by running over passengers emerging from the initial crash.

The Murga Serrano bus was transferring 42 members of the World Missionary Movement, who were returning to Lambayeque department after an evangelical conference in Lima.

In less than three months, 156 people have died in traffic fatalities in Peru, a 17% increase from 2014. “There are more car accident deaths than murders. However, more attention is given to crime when the real problem is the roads,” said Juan Huambachano, an official with Peru’s public ministry. “Eight of every ten cases are caused by negligence on the part of the drivers, who drive at high speeds and violate other rules of the road.”

The Huarmey accident is the worst in Peru since October 2013, when a bus fell into a ravine in Cusco, killing 51.

Extortion accounts for 1.5% of construction value in Peru