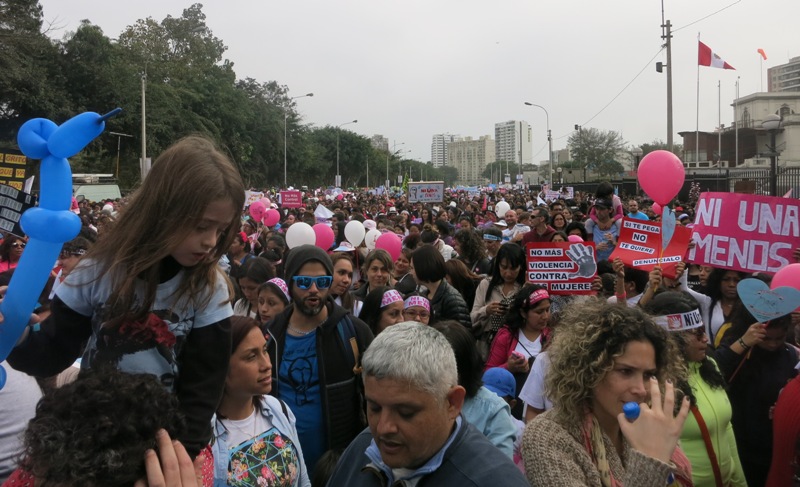 Assaults and murders of women in Peru has spiked since 50,000 people marched in the “Not One Less” protest against domestic abuse in Lima last week.

After attending a local march in Junin’s provincial capital of Huancayo, 22-year-old Patricia Romero was found dead in a ditch in Satipo province. Romero attended a nightclub after the march when she was intercepted by men on a motorcycle. Her body was found four days later. She leaves behind an orphaned month and a half old baby.

“She’s surely gone off with some guy. She’ll come back,” a police officer told Romero’s relatives when they reported her missing.

On the same day as the protest a Lima woman escaped being burned alive after ending an abusive relationship with her boyfriend. Bety Enrique, a 26-year-old mother of three, was threatened with a knife and dragged into a bedroom as she called for help. She was locked in with burning furniture as the man fled. She was saved by a friend who was passing by.

“If I had been alone I would be dead,” she told La Republica.

In the case which received the most media attention, a cell phone video showed a man brutally beating his wife in the middle of a Tumbes street in broad daylight. The man had recently been released from prison, and police released him after 24 hours when the victim declined to press charges.

The mother of four told reporters the fight was her own fault. Peru’s social services ultimately took custody of all four children, none of whom attended school, and relocated them to Huanuco.

The “Not One Less” rally was organized after reports that 54 women have been murdered so far in 2016. The march took place Aug. 13 in downtown Lima drew 50,000 protesters, including President Pedro Pablo Kuczynski and first lady Nancy Lange among other politicians and celebrities.