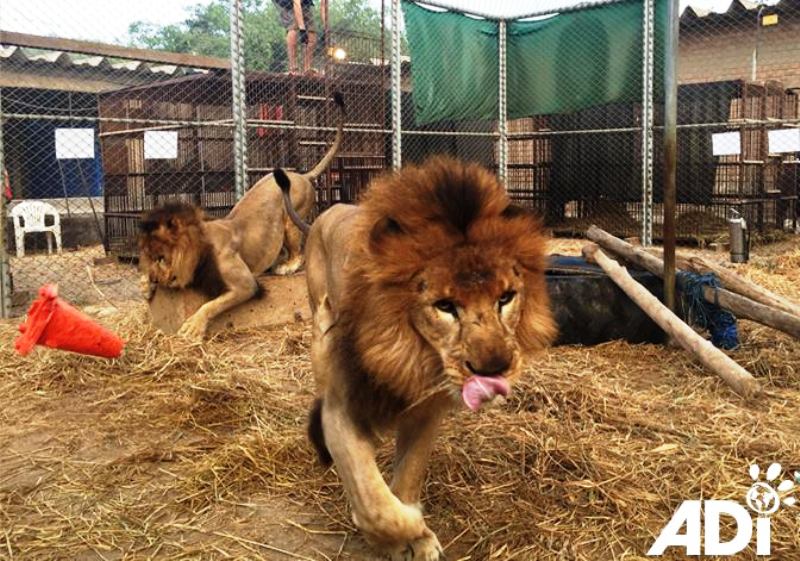 An animal rights group has flown 33 lions rescued from circuses throughout Peru and Colombia to spend the rest of their lives on a reserve in Africa.

Animal Defenders International (ADI), the U.S.-based nonprofit organization leading the rescue, began its drive in February to raise $330,000 to fly the 33 lions to a private reserve in South Africa. ADI announced on Monday that it had raised the funds and a flight was scheduled for Friday.

“24 of the lions were rescued in surprise raids by ADI on circuses in Peru. They were living in deplorable conditions in cages on the backs of trucks,” the organization says on its website.

“Nine were voluntarily surrendered by a circus in Colombia. Almost all of the rescued lions have been mutilated to remove their claws, one has lost an eye, another is almost blind, and many have smashed and broken teeth so would not survive in the wild.”

A cargo plane will transport the nine lions from Bogota to Lima before all of them are flown to South Africa. The lions will live isolated from the wild at the Emoya Big Cat Sanctuary, where they will be progressively introduced to each other.

The circus raids in Peru were conducted throughout 2014 and 2015 in Lima, Arequipa, Cusco, Piura and Junin. Most of the animals were rescued before Peru passed a new animal cruelty law last November. Circus owners which display wild animals or others found guilty of mistreating animals will now be punished with three to five years in prison. The law includes exemptions for bullfighting and cockfighting.

Last week ADI flew a tiger named Hoover, a tiger rescued from a Piura circus to a sanctuary in Miami. In March 2015 the organization flew a spectacled bear to Colorado for rehabilitation before returning her to a reserve in Madre de Dios.