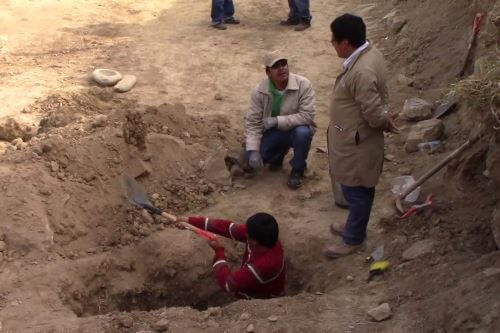 Archaeologists working at the Wariwillka site in Huancayo have dug up what they are calling evidence of a pre-Incan culture known as the Wari. Peru’s Culture Ministry confirmed the findings Thursday after they were accidentally discovered when a construction project leveled off a structure in the area.

“We are recovering and safeguarding archaeological heritage in accordance with National Cultural Heritage Law,” on-site archaeologist Ronald Sullca told state-run news agency Andina. “We’ve found some lithic remains, fragments of ceramics, human bone remains, and a salvage procedure is being performed before handing them over to Culture Ministry for their protection.”

It is initially believed that the findings are from the Wari culture, which was present from around 500 to 1000 AD in a large portion of Peru, mainly along the coastline. However, the exact location of the findings was a popular zone for numerous civilizations over the course of different centuries.

“We are going to analyze them (the bones and artifacts) to determine whether they belong to Wari period since the place is located 100 meters away from the archaeological complex of Wariwillka, known as Wankas’ place of origin,” Sullca said.

The current dig area is private land of 500-square meters owned by a local man named Porfirio Aquino who bought it a few decades ago.

Another archaeologist on site commented to Andina that the current excavation spot was most likely a burial site for the Wari culture.