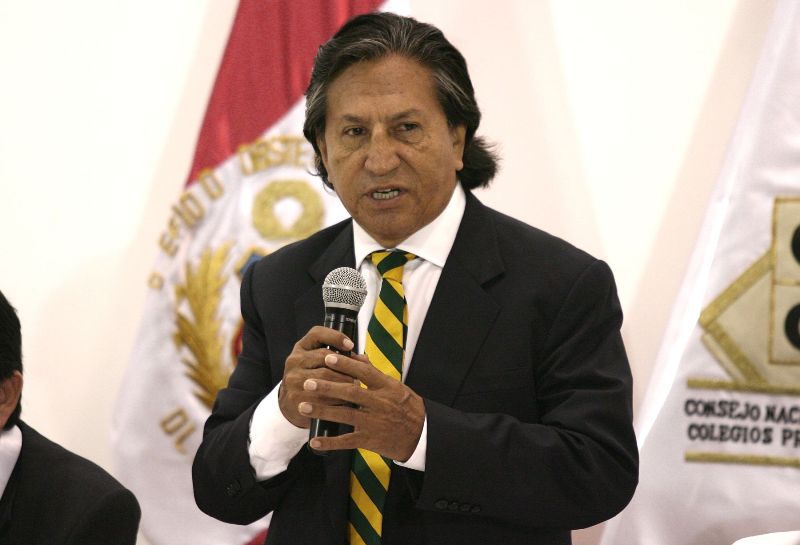 Alejandro Toledo is an economist and former President of Peru who served from 2001 to 2006.

Toledo was born March 28, 1946, one of 16 siblings in an indigenous Quechua family in the Ancash department. The impoverished family moved to the port town of Chimbote, where Toledo grew up with no electricity or running water. Toledo shined shoes and sold newspapers as a child.

With the help of two Peace Corps volunteers and a soccer scholarship, Toledo was enrolled at the University of San Francisco in the United States. After completing his undergraduate degree, he went on to complete a master’s in economics and doctorate in education from Stanford University.

Before entering Peruvian politics, Toledo worked at the World Bank, Inter-American Development Bank, United Nations and the Harvard Institute, during which he lived in Buenos Aires, Lima, Boston, Washington DC and Tokyo.

Toledo returned to Peru in 1994 and formed the Peru Possible political party. Running for President against then-incumbent Alberto Fujimori, Toledo won 4 percent of the vote. That candidacy marked the beginning of Toledo’s leadership of the opposition to Fujimori, whose repressive tactics and hardball offensive against the Shining Path guerrilla rebels resulted in frequent atrocities against indigenous communities throughout Peru committed by the military.

Congress passed a law granting an exception to term limits only for Fujimori, and he ran for a third presidential term in 2000. Toledo was positioned as the top opposition candidate and campaigned on economic reform and reducing inequality, touting his indigenous roots by wearing traditional clothing, drinking water from rivers and going by the nickname, “The Cholo from Harvard.” Fujimori narrowly won the highly contested election, which Toledo fiercely contested in protests and marches.

Soon after the disputed results, Fujimori’s government collapsed after videotape evidence of corruption in his administration surfaced. Fujimori resigned and went into exile in Japan. A fresh election was scheduled for 2001, which Toledo won with over 52% of the vote, beating former President Alan Garcia. Toledo became South America’s first democratically elected President of indigenous descent.

Expectations for Toledo’s economic performance were high given his education, work experience and campaign promises. But after decades of economic mismanagement and civil war, which caused a spike in poverty, Toledo had difficulty effecting noticeable change. Adding to his woes was the 2001 earthquake in southern Peru, the world’s strongest earthquake in almost 40 years, which devastated the mining-rich regions of Arequipa, Tacna and Moquegua.

While the macroeconomic statistics showed improvement, including a 25 percent decrease in extreme poverty, 6 percent GDP growth per year and low inflation, Toledo’s approval ratings sunk to single digits due to high-profile corruption scandals involving people in his administration, labor strikes and a general opinion that the economic situation was not improving. A 2001 constitutional amendment following the Fujimori government prevented Presidents from serving two consecutive terms, but Toledo would not have been a contender anyway. He was succeeded by APRA party candidate and former President, Alan Garcia.

After his presidential term, Toledo returned to the United States to work in academia and public policy. He worked for Stanford, the United Nations and Brookings Institution.

In 2011, Toledo ran for a second term as President of Peru. He won 15% of the vote, trailing Ollanta Humala, Keiko Fujimori and his former economic adviser, Pedro Pablo Kuczynski.