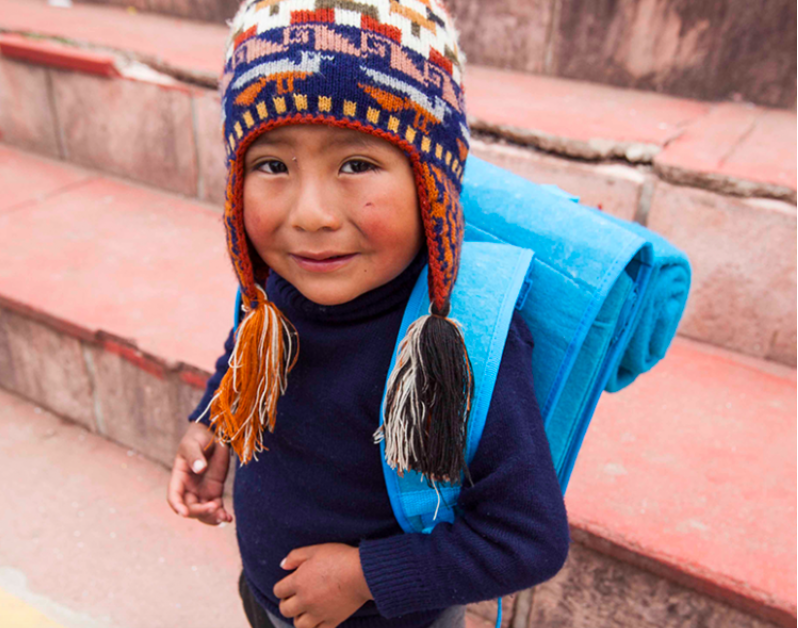 The rapidly changing weather in Peru’s mountain towns can make it hard to plan for the little ones. But ponchilas, the ingenious mixture of poncho and backpack, can help solve the problem of an uncertain climate.

Millions of plastic bottles in Peru have been converted into these ponchilas for thousands of underprivileged children in the Andes regions of the country. Kids who sometimes have to walk a few kilometers each day to and from school have a pressing need for lightweight cover and the influx of donations has shown to deter dropout rates among these young students.

The campaign Yo Fui Botella (I was a bottle) makes each ponchila from 80 plastic bottles and turns gives it a bright blue exterior that schoolchildren can use for packing their books before easily unfolding it to protect themselves against the elements. With help from the Environment Ministry and local nonprofits, Yo Fui Botella has now been donating ponchilas to kids for two years, with more than 6,000 donations made in the first school year alone.

“With this initiative, we are recovering a lot of plastic that could end up in landfills, dumps or in the oceans,” Miguel Nárvaez of supermarket chain Cencosud, which helped start the campaign in 2016, told the United Nation Environment Program.

Some 7,000 ponchilas have already been made for kids this year thanks to the joint initiative from a trio of businesses: Cencosud, Coca Cola’s Agua San Luis and Pacifico Seguros. Donations have been made to the rural Peruvian regions of Puno, Cusco, Arequipa, Huancavelica, Ayacucho and Apurímac.

The Environment Ministry jumped on board with the good cause this year after seeing the successful campaign help schoolkids in the Andes.

“With this initiative what we are doing is closing the circle, using our waste and giving them an added value through recycling,” said Environment Minister Fabiola Muñoz.

According to the UN Environment Program, there are 18,000 tons of waste generated every day and nearly 2,000 tons are in plastic alone. Muñoz and environmental activists in the country see the Yo Fui Botella project as the perfect example of how recycling can positively impact lives while helping the wider environment.

“A bottle that served you can become something useful for someone else,” Muñoz said. “We have the opportunity to convert something that apparently no longer has a use into a positive thing with a new use.”