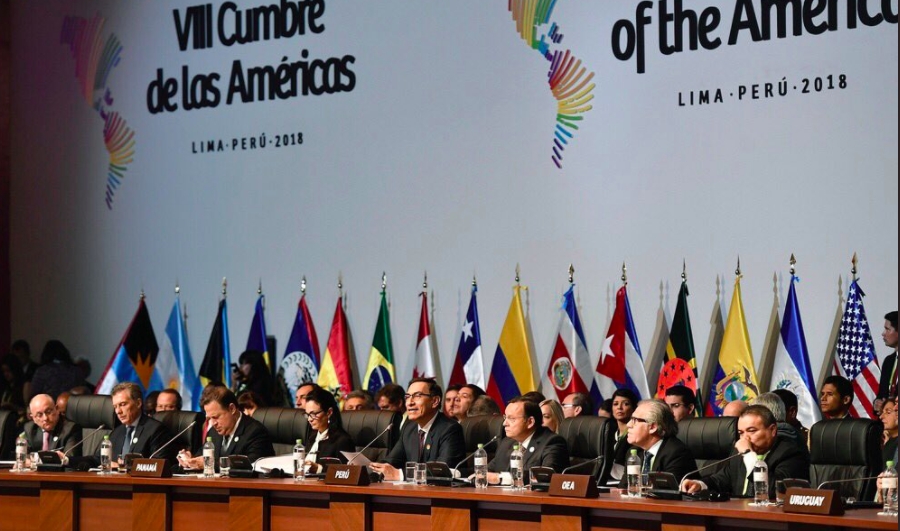 Leaders from throughout the Americas agreed to an informal promise that they would abstain from and root out political corruption in their respective countries at the Summit of the Americas in Lima this weekend. Through a legally nonbinding document called the Lima Compromise, the regional heads of state made the agreement that they would take “strong stands” against corruptive practices.

The document suggests the use of electronic systems that track government purchases as well as public works contracts so that governments are fully transparent with citizens of each country.

“I reiterate the call to make a regional pact against corruption,” said Peru’s President Martín Vizcarra in front of leaders from the region. “And for a zero-tolerance policy against the corrupt.”

He added: “Peru has assumed the challenge of fighting directly against corruption. That is my government’s top priority.”

Saturday’s plenary session at the summit saw leaders from throughout the region offer their thoughts on key issues today, as many carried on the event’s theme to denounce political corruption, express solidarity with the slain Ecuadorian journalists, and speak on the situation in Venezuela.

Argentine President Mauricio Macri and Chilean President Sebastian Piñera, among others, repudiated Syria’s use of chemical weapons but expressed caution at escalating the situation following the U.S. attacks on Damascus.

Without some of the headlining names in the region in attendance, perhaps the most interesting speech came from Bolivian President Evo Morales, who spoke out against the U.S. government, calling it “the principal enemy against freedom, against democracy, against Mother Earth, and against multilateralism.”

He added that authorities in Washington DC should suspend the building of a border wall with Mexico, defund the military prison on Guantanamo Bay, and totally lift their archaic blockade with Cuba. Morales also expressed regret for his “brothers” in Cuba and Venezuela, as both Raul Castro and Nicolás Maduro did not attend the summit.

“We profoundly regret that our brother Nicolás Maduro is not sitting here with us,” Morales said of his controversial political ally.

In relation to the worrying developments in Syria, Peru’s Foreign Ministry released a statement Saturday saying that it condemns the use of chemical weapons and “makes a call for diplomacy between all the concerned actors to avoid any escalation that would put international peace and security at risk.”