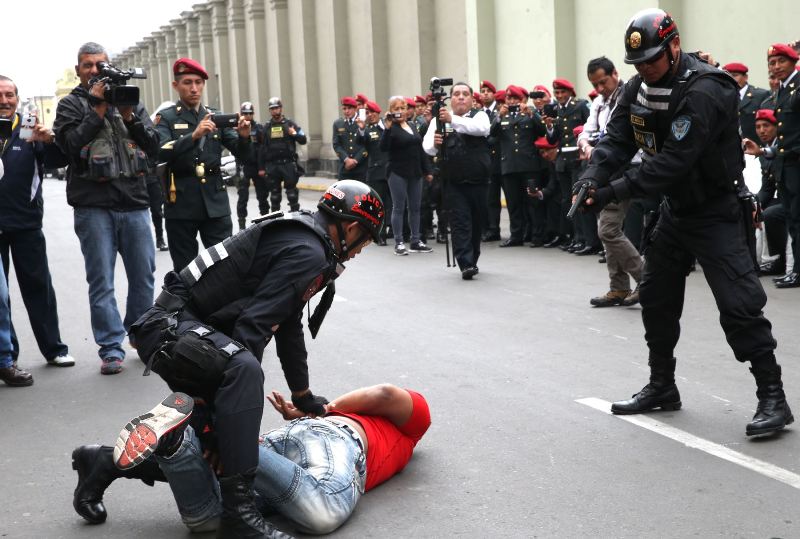 The state of emergency published in Peru’s state newspaper suspends individuals’ constitutional rights for 45 days. Police can restrict citizens’ freedom of movement and freedom to assemble, as well as enforce curfews. The decree also suspends the public’s protection from illegal search and seizure.

Interior minister Jose Luis Perez said in a press conference that the government is looking to prevent a pending war between rival drug gangs.

“The verdict from police intelligence is that it is highly likely that these gangs start a war between themselves,” Perez said. “We want to prevent, beyond what these criminals do to themselves, we want to protect the citizenry.”

Perez added that while police will be empowered to enter homes without judicial authorization to search for weapons caches and drugs, Peru’s military will not be involved in the crackdown. However the state of emergency allows for the army to be deployed if needed.

“Here in Callao what is happening is very serious,” said Callao governor Felix Moreno. “There is a wave of street gangs and organized crime that kill over payments from construction, extortion and drugs. The police do a great job and we thank them, but they can’t stop it.”

A recent El Comercio report showed that the murder rate in Callao increased 10% in the last year, over six times the 1.5% growth of homicides in Peru. Most of the violence stems from drug trafficking through the port of Callao, the country’s largest seaport, as well as extortion gangs battling over construction jobs.

Peru’s government declared the state of emergency in the wake of the murder of Callao security guard Wilbur Castillo, who gained fame as a municipal whistleblower in 2012 and had served prison sentences for kidnapping and extortion. Callao prosecutor Juan Mendoza is believed to be the next target of alleged drug trafficker Gerson Galvez.

The drug and gang violence in Callao coincides with increasing comparisons of corruption in the Chim Pum Callao political party which has controlled the region for 20 years to Peru’s Ancash state under governor Cesar Alvarez and the infamous La Centralita scandal. Governor Felix Moreno is one of several party leaders under investigation for a slew of corruption charges.

“It looks a lot like Ancash, but they’ve been in power twenty years. In Ancash Mr. Alvarez was only seven,” said congressman Victor Andres Garcia. “First you have to investigate, because we cannot accuse anybody of every crime. But there is a political responsibility of the authorities who have governed for 20 years and haven’t done anything, and Callao today is much more dangerous than it was 20 years ago.”