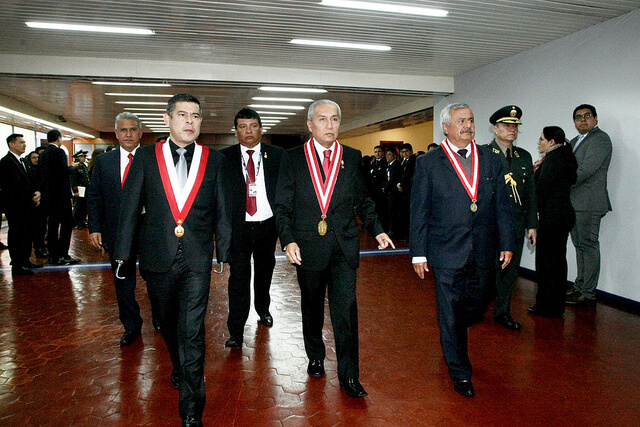 The long-reaching tentacles of Peru’s judicial corruption scandal could sink another key official in the country as officials are starting to call for action against Attorney General Pedro Chávarry. Prosecutors recently accused of providing favorable judicial appointments in exchange for money in connection with the White Collars of Puerto (Los Cuellos Blancos del Puerto) criminal organization.

This latest turn against the country’s top prosecutor is the latest in a month’s long investigation against judges and high officials heard on leaked audio tapes discussing generous rulings spurred on by kickbacks and bribes. Already, the head of the judiciary and the justice minister have stepped down in connection to the tapes.

In response to the charges against him, Chávarry said he will be cooperative in the investigation. In previous statements, he has refused calls from the public and government officials for him to step down.

Chávarry said that, although he knows the supreme court judges and supreme prosecutors who are accused to make up the White Collars group, he has done nothing wrong.

“They want to link me as a member of the White Collars,” Chávarry said in a Twitter statement on Thursday night. “I wait as they set out the actions I took to provide favor to this criminal group. I know some of them, I never denied that. If they wanted to be given favors, they were wrong. I will be implacable in the investigation.”

Chávarry’s implication in the judicial corruption scandal is the latest chapter in the saga that has led President Martín Vizcarra to create a reform board with the intention of conducting investigations into the country’s top officials and making sweeping reforms in the judiciary.