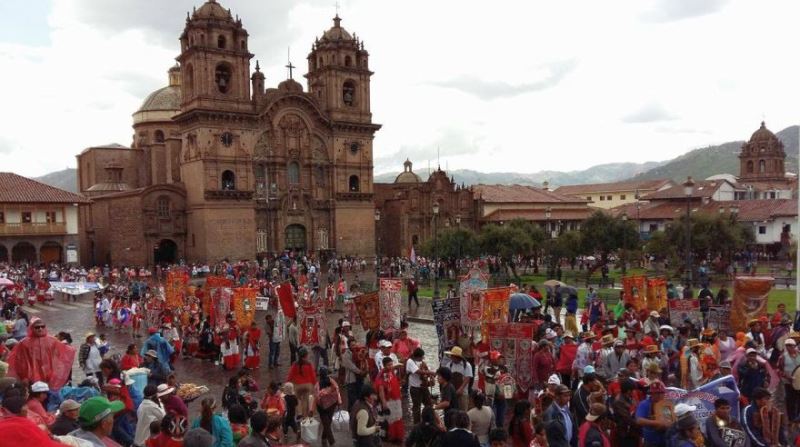 Thousands of protesters demonstrated in Cusco’s downtown plaza to demand the repeal of dozens of mining licenses in a sacred region of the Quispicanchi province.

Protest leaders say that gold-mining licenses granted in 2013 infringe on part of the sacred grounds of the Lord of Qoyllur Riti sanctuary. The religious festival observed by residents from throughout Cusco state sees thousands make the pilgrimage to the area for celebrations including indigenous dances which were recognized by the national government as cultural heritage in 2004.

Protest leaders say that while the small mining operations legally sanctioned by the state encourage illegal gold mining in the province which harms the environment and threatens the Lord of Qoyylur Riti grounds.

Over 100,000 residents of Cusco and greater Peru flock to the Sinakhara valley before Holy Week every year to camp in freezing temperatures in celebration the Lord of Qoyllur Riti. The tradition with roots in pre-colonial times was Hispanicized into a Catholic tradition in the 18th century.

As the launching point for the Machu Picchu ruins, Cusco is Peru’s top tourist attraction. Demonstrations in October paralyzed the city and prevented thousands of tourists from reaching Machu Picchu in protests which ultimately led to the repeal of an archaeology privatization law passed by the national government.