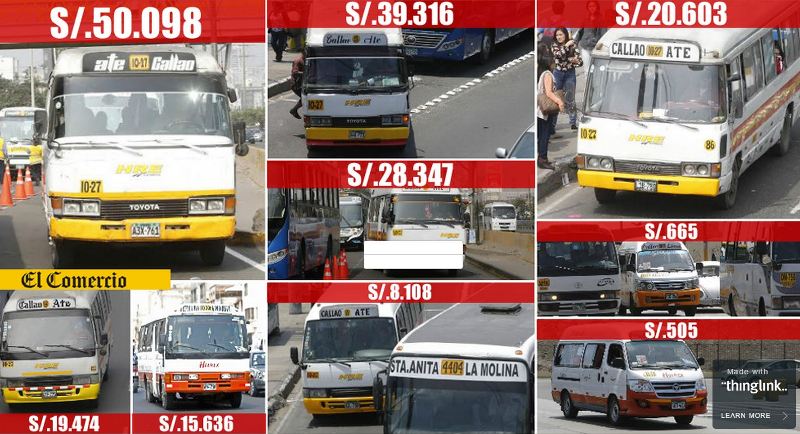 Investigations by the newspaper, El Comercio, have revealed how bus companies and drivers avoid paying millions in fines and continue operating.

The newspaper’s investigations were inspired by an accident which involved a bus that had accumulated $435,000 in over 350 outstanding fines. Despite an order from the city of Lima to be removed from the roads, the bus was speeding in San Juan de Lurigancho when the driver lost control and jumped a curb, injuring 12 including five minors.

The bus returned to the roads after the accident with the same driver as before when it was stopped by police for illegally driving along Arequipa avenue, a thoroughfare restricted to Lima’s Blue Corridor bus system. The driver fled the scene.

Authorities determined that the bus, which had many of its windows broken and bumper damaged, had been quickly repaired and returned to the roads after a scandal which had been featured on the nightly news. The newspaper investigation aimed to answer why the bus was not impounded, and why was the same driver not arrested or at least fired by the bus company.

The story of the “pirate bus” came one month after a bus driver with 62 outstanding fines, most for serious or very serious infractions, killed an elderly woman in Surco. El Comercio started its investigation at outstanding fines among the Lima buses.

The newspaper’s investigation found that the various bus companies operating in Lima and Callao owe over $124 million in unpaid fines. The Empresa de Transportes y Servicios Orion owed the most at $3.8 million from 6,250 outstanding fines. The Callao-based Orion operates both buses involved in the accidents described in this article.

However the Lima tax authority SAT does not have enough agents to enforce the fines and impound vehicles. Transit police can fine the drivers, but they can only impound a vehicle under a judge’s order.

Meanwhile, SAT is busy fighting to collect about 20% of the outstanding fines. An official working in debt collection says that the bus companies appeal the fines indefinitely to delay payment.

“When [somebody appeals], the process stops. If the vehicle is held by SAT, it must be released. The offender does not pay the debt until there is a definitive ruling from the supreme court, which is the final recourse. This process can go on for many years.”

El Comercio reported today that the bus companies also incorporate new companies to operate the same buses along the same routes. Orion recently re-branded many of its buses under the names, “Holrex” and “HRE Express.”

Transferring licensed routes to new companies, which Orion did for Holrex and HRE Express despite the owners being the same, should also transfer the buses’ fines. But Peru transit officials said that the companies are trying to complicate the paper trail for tax investigators at SAT.

“The tickets and fines can disappear,” said Lino de La Barrera, a consultant to Peru’s transit and communication ministry. “Somebody who hasn’t been following this case would say that Orion is out of business, but it just changed its corporate name so it’s necessary to go the extra mile in the investigations.”

When El Comercio contacted Wilfredo Chavez, owner of Orion, with the phone number provided by the company now known as Holrex, the man who answered the phone denied being Chavez.