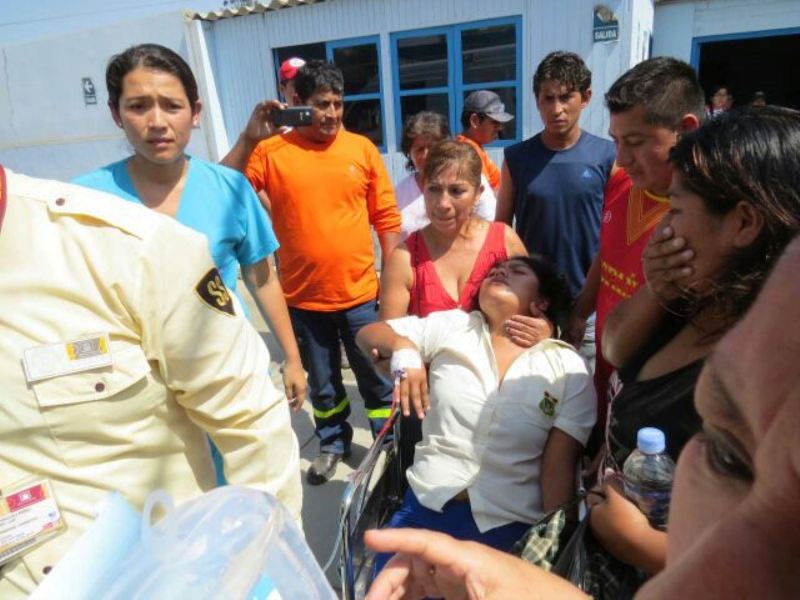 A plane spraying herbicide near a high school in Ancash poisoned 92 students and three teachers on Tuesday.

The crop-dusting plane sprayed a sugar cane field adjacent to the San Jose high school in Nepeña, a rural district southeast of Chimbote in the province of Santa, at 10:30 a.m. when classes were in session. Dozens of students and three teachers suffered symptoms including stomach pain, headache, vomiting and itchy eyes. Some students even fainted.

“The sugarcane fields which were fumigated are located just 10 to 15 yards from the school,” Nepeña city manager Benito Agreda told Andina. “We have four very serious cases, in which the children have been transferred unconscious with IVs to the Regional Hospital of Nuevo Chimbote. The others are receiving attention in San Jacinto and the Essalud hospital in Nepeña.”

A justice department official told El Comercio that the substance sprayed by the place was glyphosate, a pesticide and herbicide used to control weeds in crop fields. Glyphosate is the main ingredient in Monsanto weed-killer Roundup.

According to the Environmental Protection Agency, glyphosate has low toxicity for humans. However the agency recommends not entering crop fields for 12 hours after spraying.

Most of the students were released from a local hospital by Thursday morning. The school will remain closed until Monday.

The plane which sprayed the Grupo Gloria cane field was operated by Agroindustrias San Jacinto. Spokesmen for the company said it would cover healthcare costs for those affected and perform cleanup work.

The justice department has launched an investigation into Agroindustrias San Jacinto as the Nepeña municipal government decides how to sanction the company for fumigating without a license.