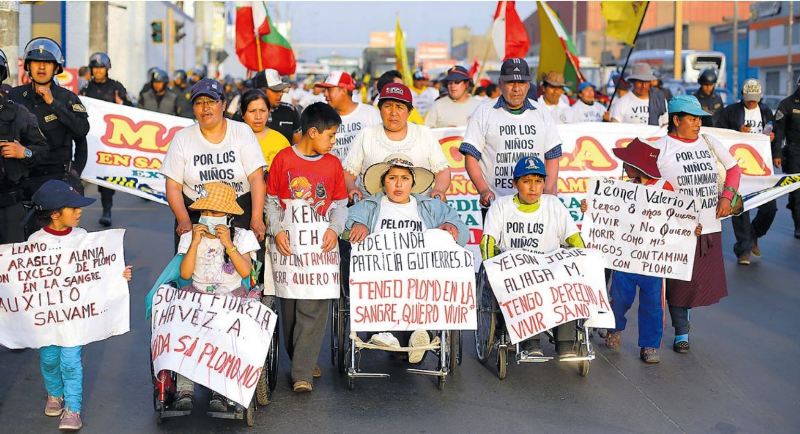 Over 50 demonstrators marched for 13 days from Peru’s central state of Pasco to the capital of Lima to highlight mineral contamination in their community.

The “March of Sacrifice” looks to call attention to toxic levels of mineral contamination in Cerro de Pasco. The demonstrators from Cerro de Pasco’s Simon Bolivar district include young people confined to wheelchairs for various afflictions stemming from toxic levels of lead in their blood.

With chants of “Yes to life, no to lead!”, the protesters want Peru’s government to provide medical treatment to over 2,000 children in Pasco with more than 10 micrograms of lead per deciliter of blood, the maximum allowed by the World Health Organization. Most have levels higher than 15.

“The children are poisoned,” said one woman participating in the march. “We drink water contaminated with minerals, roads are unpaved and too much dust floats around. The President told us in 2012 that our environment was in distress but then forgot about us. Now our children are in wheelchairs.”

“In [our local hospital] they have not been trained to treat our children well,” the woman said. “They tell us they’re fine, or they’re not sick because of the lead.”

In 2008 a plan was approved to relocate all 70,000 residents of Cerro de Pasco due to the contamination and the risk of the city caving in due to the mile-wide open-pit mine which sits at the center of town. However the plan stalled due to residents’ opposition to relocate.

After the Spanish discovered silver in Cerro de Pasco in the 17th century, the mine provided substantial portions of Peru’s mineral productions throughout the colonial period. In 1902 the American company, Cerro de Pasco Corporation, began to exploit the region for lead and zinc for most of the 20th century.

The company was nationalized by the left-wing dictatorship of President Juan Velasco in the 1970s. During privatizations started in the 1990s under President Alberto Fujimori, the Cerro de Pasco property was sold in 1997 to Peruvian mining company Volcan Mineria, which operates the mine today.

Cerro de Pasco produced 13 tons of zinc, six tons of lead and 1.9 million ounces of silver, each a fraction of what the mine produced five years ago.

A Mine Erodes an Andean City (New York Times)

If a city’s the pits (Economist)