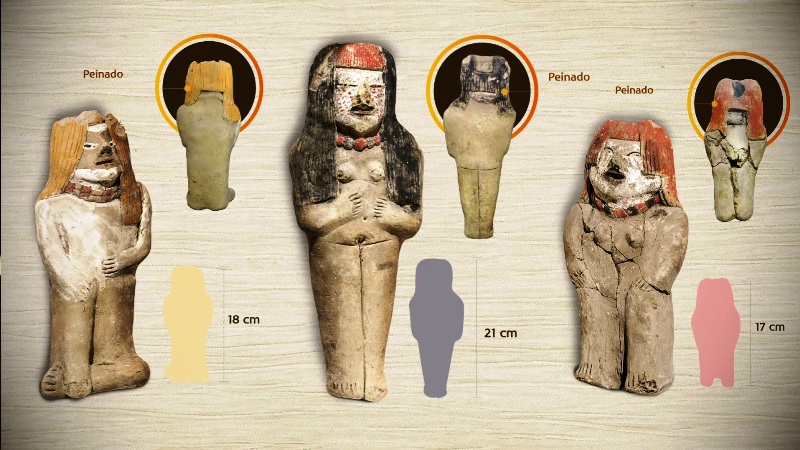 Peru’s culture ministry has unveiled three small statues from the Caral civilization which are over 3,800 years old.

The unbaked mud statues were found at the site knows as Vichama in the town of Vegueta about 75 miles north of Lima. Caral specialist Ruth Shady explains the statues depict a priestess, a man and a woman.

Shady says the statues were left as a religious offering in an arrangement of sand and ashes in the Las Hornacinas building. She added that the position in which the statues were found as well as the larger size of the priestess, who has 28 fingers and toes and whose face is covered in red dots, demonstrate the importance women played in the pre-Hispanic cultures of Peru.

The team also unveiled the heads from two female statues which were found wrapped in multi-colored feathers, evidence of the desert culture’s contact with the tribes of the Amazon.

“Now it has recently been explained why there was a social crisis in the Caral, Moche and Tiahuanaco cultures. It is something cyclical that the earth presents,” Shady said. She believes intense droughts lasting 60 to 130 years prompted the civilizations to move from the Sacred City to the Vichama site in Huaura province closer to the sea. “There was a crisis around 1900 B.C. that we are researching, caused by climate change.”

Watch the culture ministry’s presentation below.