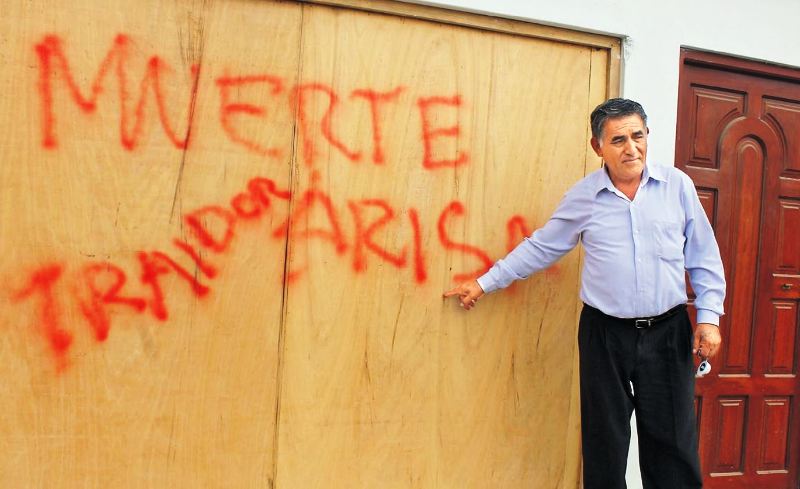 A district mayor in Peru’s northern state of Ancash was murdered along with his lawyer yesterday.

Samanco district mayor Francisco Ariza and his lawyer Henry Aldea died when a group of assailants fired over 30 bullets into their car in a town in the Santa province of Ancash yesterday afternoon.

After bullets hit both men in the head and chest, the attackers set the car of fire. Ariza and Aldea were rushed to a hospital in Nuevo Chimbote, but both were pronounced dead on arrival.

“The motive was land trafficking and squatter settlements,” said Ancash police chief Juan Galvez. “There was a part of the population that did not agree with the sale of land in Vesique. They did not approve of the mayor’s decisions.”

Ariza had requested police protection last month after receiving death threats. Somebody spray-painted “Death to Ariza the traitor” and “Sells land” on the garage door of his home and in his neighborhood.

Ariza feared that land-trafficking gangs planned to take revenge for his contracting the development of 1,562 apartments and a shopping mall in the Vesique beach town south of Chimbote. However police security never materialized.

Ariza was elected a city councilor but assumed the office of mayor in January when previous mayor Teodoro Casana was removed from office for corruption charges. Ariza told the press that the district had only $0.03 in its municipal coffers to pay workers’ salaries and fund the Glass of Milk welfare program.

Peru’s northern state of Ancash was home to some of the country’s most brazen corruption under former governor Cesar Alvarez, who looted hundreds of millions of dollars in state funds in managing a political machine accused of embezzlement and murder.