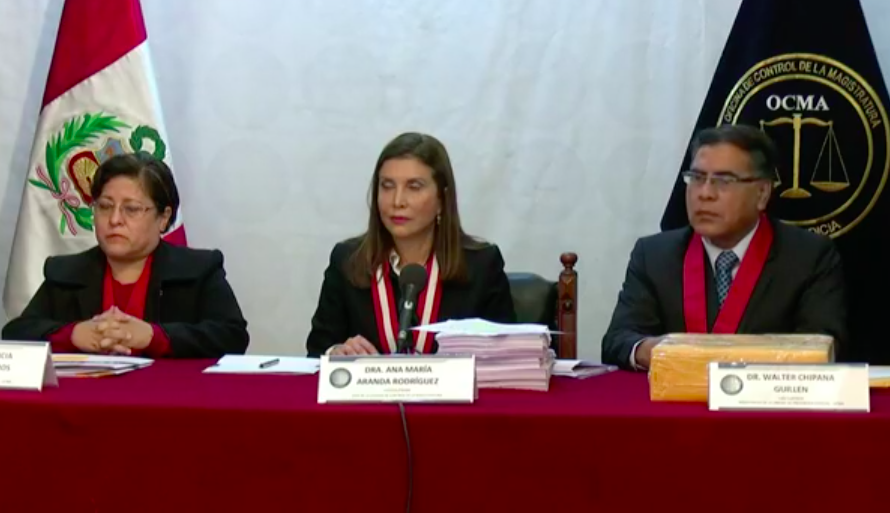 Audio tapes suggesting favoritism being used in Peru’s highest courts have led to the suspension of two of Peru’s most powerful judges and three high-ranking magistrates, just two days after President Martín Vizcarra announced reform would be coming to the country’s judicial system.

According to Andina news agency, the Superior Court of Callao Chief Justice Walter Ríos, Supreme Court Justice César Hinostroza Pariachi, and a trio of magistrates have been indefinitely suspended from their duties. Heads of Peru’s Anticorruption Office announced that they will file a legal complaint against Ríos and asked for his arrest.

“In respect to the chief justice of the Superior Court of Callao (Walter Ríos), who is not granted any impunity, he should be a prisoner at any moment,” office chairwoman Amanda Enco told reporters. “The Anticorruption Office is going to ask the Attorney General’s Office to make good on an injunction for his preliminary arrest.”

Officials said they have barred Hinostroza, the former chief justice of the Superior Court of Callao, from leaving the country.

In Peru, the Superior Court ranks as the second-highest court in the country in terms of power, just below the Supreme Court.

Ríos and Hinostroza, as well as magistrates from Peru’s National Magisterial Council (CNM), were recently tied to a series of audio tapes where they were apparently heard discussing lenient sentencing with connections to possible bribery. In one of the recordings, Hinostroza mentioned a “Miss K” of the “top party,” which many have taken to mean Keiko Fujimori of the Popular Force party that has a majority in Congress.

On one of the recordings, Ríos discussed a cash guarantee for a favorable ruling and, in another, Hinostroza talked to a caller about the case of an 11-year-old girl who was raped, asking if he should lower the sentence for the accused.

President Vizcarra has promised to be tough on corruption ever since taking over a few months ago, after former President Pedro Pablo Kuczynski was ultimately outed by audio tapes showing his political allies trying to buy votes in his favor on the eve of an impeachment decision. Vizcarra said in a public announcement this week that the judges will face strict punishment if the corresponding investigation indeed ties them to the corruption charges.

“There is no time to lose and we are acting swiftly and with severity to generate the changes that all of Peru desires,” Vizcarra said. “There is no security without a good justice system and, without that, there is no institutional stability, investments or economic and social developments. There is no way forward with corruption.”

It is unclear if the Anticorruption Office will request the preliminary detention of the other three magistrates involved in the corruption scandal.