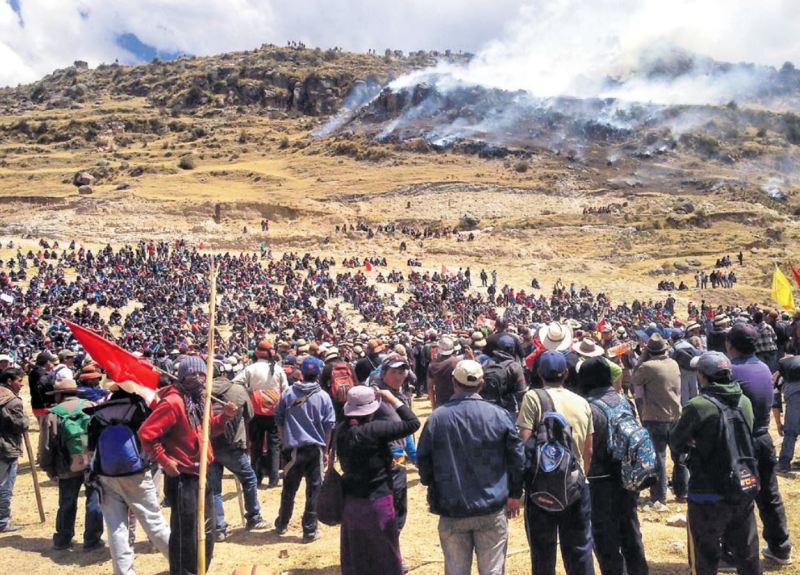 Protests against the Las Bambas copper project in southern Peru led to clashes with police which killed three and injured at least 23 yesterday.

Residents of the Cotabambas and Grau provinces in Apurimac state called an indefinite strike against the $10 billion copper mine which the Chinese-Australian MMG Limited has slated to begin production in January. Protesters allege there were irregularities in the environmental impact study including the moving of a molybdenum plant.

While the first three days of the protests passed without incident, violence broke out yesterday afternoon after police tried to disperse a crowd of 2,000 demonstrators from a bridge in Challhuahuacho.

Officials say a group of protesters then attacked an isolated group of police, who opened fire. Protest leaders deny their ranks attacked first. By the end of the day, three were dead and over 20 injured. Police arrested 30 protesters.

All three of the deceased were protesters killed by bullet wounds. Among the injured are eight police officers, two of whom are in critical condition.

“The time for waiting is over,” said protest leader Jaime Osorio. “We won’t stop this protest until the government shows its face. Let the ministers come, let the government come.”

This morning President Ollanta Humala declared a 30-day state of emergency to implement martial law in the Cotabambas, Grau, Andahuaylas and Chincheros provinces of Apurimac state as well as the Chumbivilcas and Espinar provinces of Cusco.

“A few thousand people led by a few cannot stop a project of this size, which is a huge investment, the biggest in recent years and which represents about 1.5% of next year’s GDP,” said interior minister Jose Luis Perez.

“We cannot be naive. You don’t have to be a genius to see that they are using the same methods that they have used in other regions,” said Apurimac governor Wilber Venegas. “There are people infiltrating from other areas.”

The Las Bambas copper mine contains over 40 million tons of reserves. When it begins producing in the first quarter of 2016, its annual 400,000 tons will make it the third largest copper mine in the world.

Production at Las Bambas, the stalled Tia Maria project and other expansions will make Peru the second copper-producing country in the world.