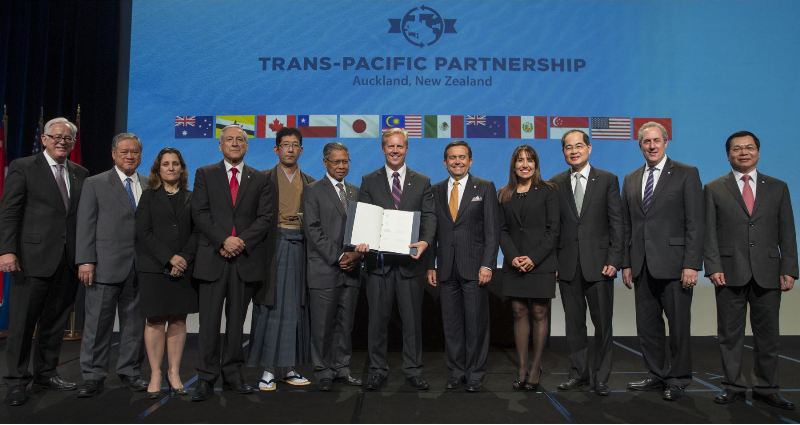 Peru and 11 other countries including the United States formally signed the Trans-Pacific Partnership agreement in New Zealand on Thursday.

With 12 member countries whose population of 800 million make up 40% of the world’s GDP, the TPP is the largest free trade agreement in history. Now each member state has two years to ratify the agreement.

“Our non-traditional exports should grow 25% in just three sectors where Peru has major advantages such as food, alpaca textiles and fish products,” said commerce minister Magali Silva, who negotiated details of the agreement for Peru.

What did Peru get out of the Trans-Pacific Partnership?

“We are consolidating our open-market policy to develop with other Pacific Alliance countries,” Nationalist Party congressman Josue Gutierrez told Andina in reference to Chile and Mexico. While Colombia is the only Pacific Alliance member not a part of the TPP, the country has formally requested inclusion.

Each member state faces differing degrees of difficulty in the next hurdle of ratifying the trade deal at home, which Malaysia is the only country to have done already.

Hundreds of protesters marched against the TPP in downtown Lima two weeks ago. Opponents to the deal say that a provision extending patents on some drugs from five to eight years will increase the cost of medicine.

“You will not be able to buy generic medicines, and the brand-name drugs will cost whatever the pharmaceutical companies dictate. The patents for biological medicines will be extended,” read a flyer from the march obtained by RPP.

The second issue for Peru’s opponents to the deal is intellectual property. The agreement requires internet service providers to remove copyrighted content and includes penalties for those who fail to do so.

Despite the scattered protests, Peru has signed more free trade agreements than any other country in the region during the last 10 years. While presidential frontrunner Keiko Fujimori has not declared a position, Julio Guzman, Pedro Pablo Kuczynski and Alan Garcia have expressed support for the deal. Cesar Acuña is the only contender in 2016 elections who opposed the TPP.

Ironically, one of the most difficult legislatures to ratify the agreement will come from the United States. President Barack Obama spearheaded the idea by saying the United States should write the rules on trade, and not China. Both Hillary Clinton and Bernie Sanders have come out against the deal in an effort to win the Democrat primary.

The Republican party is not guaranteed to support the TPP as Donald Trump has risen to the top of polls on isolationist rhetoric, Iowa caucus winner Ted Cruz also opposes it and even establishment senator Mitch McConnell has said he “has problems with the deal.”

Key lobbies for and against the deal in the United States include tobacco, pharmaceutical companies, organized labor and environmental organizations.