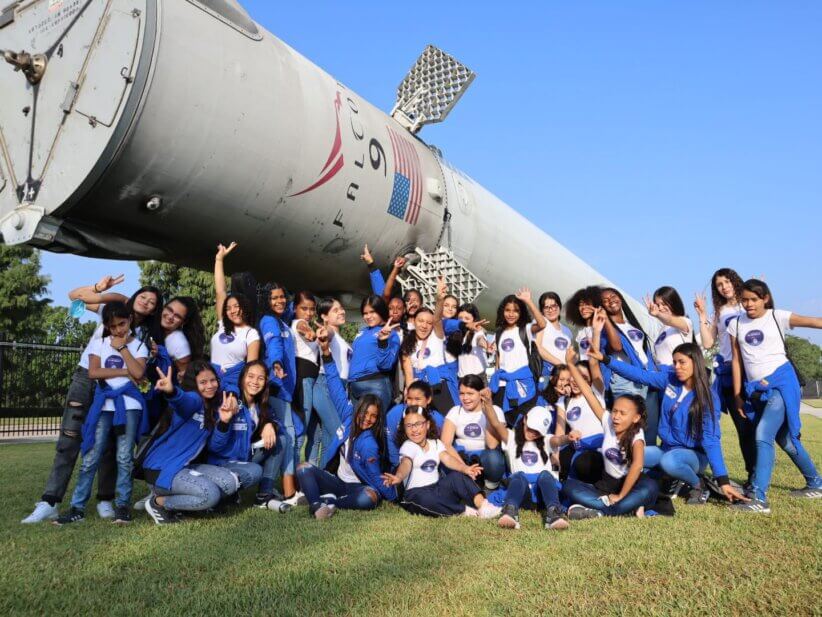 Colombian girls visiting NASA's Falcon 9 (2021). Image courtesy of her She Is Foundation.

At just 15 year, Niurka Leiva dreams of being an aerospace scientist or a neurosurgeon. She’s getting a chance to experience one of those dreams as part of a group of 14 young women from Peru who are currently training with The National Aeronautics and Space Administration (NASA) in the United States.

The group of girls ages nine to 15 come from disadvantaged backgrounds, and from May 2 through August 29 will receive STEM (Science, Technology, Engineering and Mathematics) training from NASA engineers, and will also travel to Johnson Space Center in Houston, Texas where they’ll put some of their training to the test.

The “She is Astronauta” program “deepens and strengthens the empowerment of women,” said Marcela Cubides Proaños, Vice President of the She Is Foundation which created the project in Peru.

“Girls are told that it doesn’t matter what they want to study or their economic situation, because they can be what they want,” Ms. Cubides Proaños told Peru Reports.

The She Is Foundation is a non-profit organization that has been working in Colombia and Latin America for over six years. Its actions focus on the economic development of women, social innovation and women empowerment.

Ms. Cubides explained that She Is was created “as a 360 degree economic model where women have the possibility of development and can break the cycle of poverty.”

In 2019, the non-profit signed an agreement with NASA to work with girls on developing their STEM skills. In 2021, the foundation held its first edition of “She is an Astronauta,” inviting 31 young women from Colombia to participate.

This time around, the girls from Peru will receive training and support from a team of engineers, astronauts and CEOs from allied organizations including Bancolombia, Grupo Energía Bogotá, Coca Cola, Bavaria, among others..

“This experience is wonderful from the first minute,” exclaimed Ms. Cubides, who also detailed how for the last five days of the program the young women will travel to Houston’s Johnson Space Center to meet NASA engineers and managers and will learn about rocket building and space survival for astronauts.

The project aims to not only educate young girls in STEM, but also to help fuel a social transformation in Peru and Latin America.

“These girls become agents of change in their communities and arrive with a new mindset,” according to Ms Cubides.

In addition to training, the program also includes an entrepreneurial STEM project that each participant must create, and the foundation provides training and resources to help the young women establish their ventures upon their return to Peru.

“When the girls return to their country, we help them to achieve their ventures. In addition, the girls continue to be part of the foundation and we help them get scholarships to universities,” said Ms Cubides.

“Dreams can come true and we believe in each of the programs we do. We believe that this is the way to generate a true social transformation in Latin America, understanding women as the nucleus of society and family. If we transform a woman we are also transforming her environment.”

“I will continue to make an effort to show that it doesn’t matter where you come from, because everyone builds their dreams and makes them come true. I am going to be an agent of change in my community and I will replicate everything I have learned when I return.”, told Niurka ti Peru Reports.