The inside look at an all-women coding school in Peru 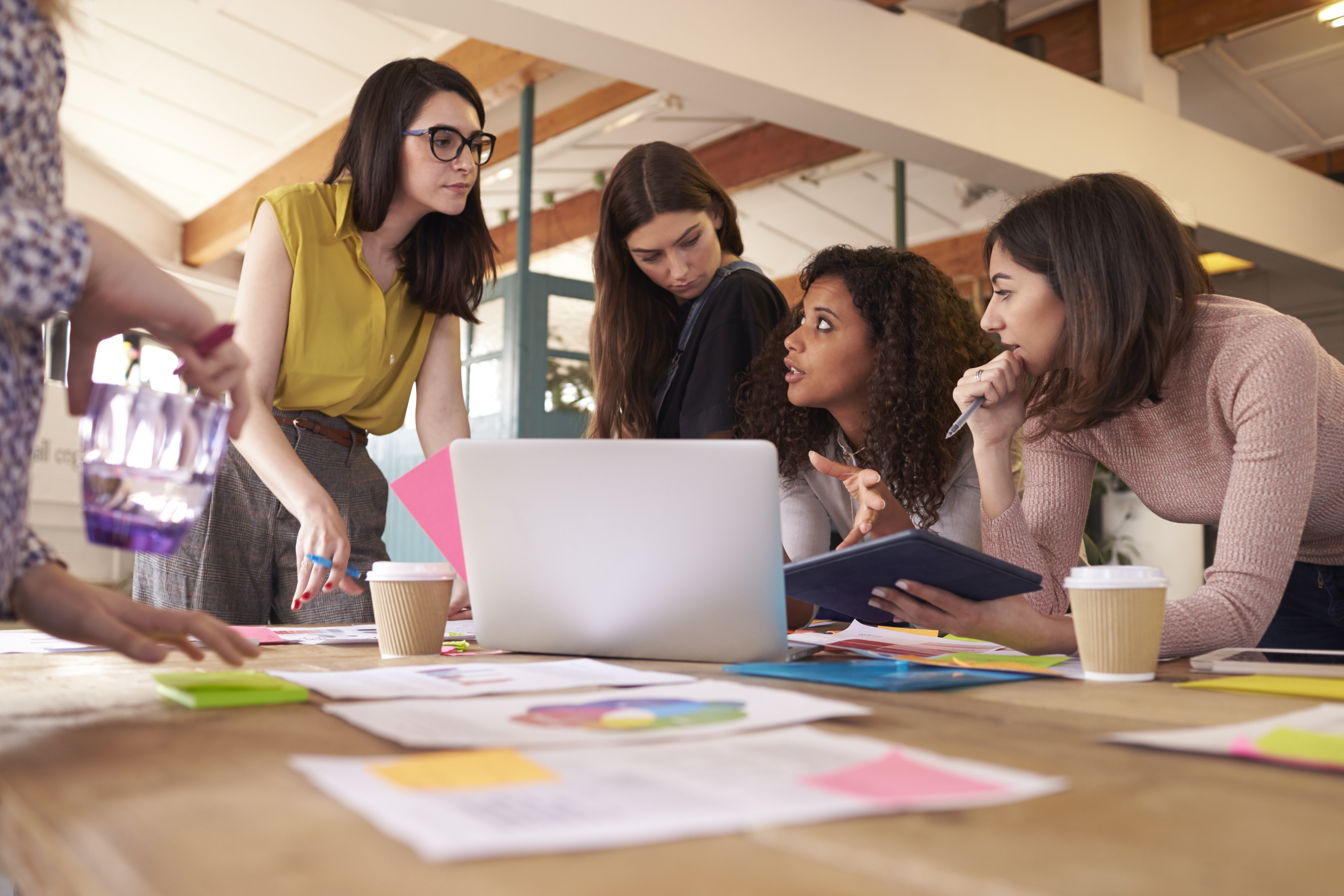 PeruReports wrote a story on Laboratoria last month, a Peruvian-based startup that teaches Latina women from low-income backgrounds to code. We spoke to Gabriela Rocha, the Global Associate for the company about the future of the company, what women are capable of and how to close the gender gap in the world of tech.

Gabi, as she likes to be known, has lived in 13 cities in 7 different countries, which has influenced a lot of her work. She is passionate about social development and has worked in various projects, including one in the favelas of Rio de Janeiro where she promoted sport as a way out of the difficulties they faced in their day to day life.

During her masters in International Development, she met those who are now partners in Laboratoria, who had the same dreams to give something back to Latin America using their privileged experiences. As Laboratoria started out in Peru, Rocha moved to Mexico. There she saw the same problems, which drove her to start up the Mexican Laboratoria, more of a parallel program than an expansion as the two developed at the same time. After three years managing the Mexican headquarters, she became a Global Associate and is focusing on ways to expand Laboratoria to more countries.

Different countries have different challenges, but the differences aren’t as big as one might expect, Rocha explains. Although different cultural elements do play a part and the initiative is always adapted to the students, it’s more of a reaction to the individuals than to the country itself. Adaptations they have made are changing how quickly they go through the course, which could be due to differences in public education in various countries.

“There are also differences in how they perceive the course,” Rocha said. “Chile is a country that has more opportunities, not as many as developed countries, but there are opportunities. So the way they experience Laboratoria will be different than for those in Peru, who feel like this is the great opportunity of their life.”

What is a common theme among all the students, however, is that the society that surrounds them is one that has very rigid gender roles, she says. Ever since girls are tiny, they are conditioned. In some cases this happens from the moment we’re born, or even before with nurseries and baby showers all bathed in pale pink, which has important behavioural implications. This is a very large factor in the assimilation of gender expectations.

She went on to explain that from around the age of nine, girls start to lose confidence in themselves and start to believe that they aren’t cut out for the more difficult subjects, such as maths and sciences.

“This has nothing to do with the capability of the women, it has to do with society’s expectations of them,” Rocha said. “More than a lack of self-confidence, I think that society is constantly sending us signals, saying that this isn’t for you so you need a ridiculous amount of self-belief to do those things.”

It’s not just women who feel the negative effects of this, as boys and men have the same pressure of societal expectations pressed upon them from a young age. This has negative effects for them as well as the world that they are living in.

“We’re not just talking about equality for women, we’re talking about gender equality,” she said. “That means that any person, independently of their gender can develop themselves however they want and identify what is good for them, and what they like.”

It’s easy to blame individuals for their behaviour, and this is happening across many spheres, especially feminism, where many feminist discourses can veer dangerously close to the ‘man-hating’ category. However inexcusable an individual’s behaviour is, it’s important to realise that this behaviour is a product of a society, and we need to fight the cause not the symptom in order to effectively produce a change.

Therein lies the problem, Rocha notes, as many Latin American countries don’t have the necessary policies or incentives to promote gender equality. Although people talk about the desire to push women to have the same opportunities as men, we cannot expect women and men to have the same job opportunities in a society that still believes women should be at home looking after the children.

Men hold 75% of jobs in tech, according to an ISACA global survey report, and there are various startups that have jumped on the bandwagon on teaching women from low-income backgrounds to code in order to bridge this gender gap. Rocha believes that the reason behind this is that it’s an industry that is in a period of massive growth, providing many opportunities, and rejects the idea that only half the population can take advantage of these possibilities.

According to an article written by The Guardian, although teaching women to code is an attempt to fix the gender imbalance in tech, it could just reinforce it. Within the coding world a segregation exists between men and women, the paper says, where women work as ‘front-end’ developers, that is, the user interface, and men traditionally hold the better paid, more technical roles of ‘back-end’ development.

“Introducing women into a discipline can be seen as empowerment for women,” computing historian Nathan Ensmenger told The Guardian. “But it is often seen by men as a reduction of their status. Because, historically speaking, the more women in a profession, the lower paid it is.”

Rocha argues that more men are back-end computer scientists because this requires a significant investment of time and money, which women have less access to. In Latin America only one in three women have economic independence, and rarely have the luxury of a five-year university degree when they’re at home looking after the house and kids.

In Laboratoria, they teach front-end developing because it’s easier to excel in over a short period of time and that there is a high demand for this kind of work, rather than to conform to any existing gender stereotypes.

“It’s kind of the chicken and the egg scenario,” Rocha said. “There are more men in tech, and women do the front-end developing. But, is it easier so women do it, or do men want it to be easier because women do it?”

One is that women are underrepresented in the industry, so in order to close the gender gap, more women than men need to have access to schooling. The second is that women are overrepresented in the demographic of young people with financial difficulties with 70-80% not having access to quality education and employment opportunities. This is why Laboratoria was created, to give women the extra push that they don’t have, and to create an environment where nobody can tell them they can’t do it, just ‘because they’re a woman.’

“Spectacular things happen in Laboratoria classrooms, simply because of the fact that they are all women,” Rocha said. “I think that bringing together a social group that for whatever reason suffers discrimination generates an atmosphere of empowerment that can have a unique result, that maybe wouldn’t happen in any other context.”

Maria Elena Yañez, who also works for Laboratoria, also founded Empoder, which teaches low income children in Silicon valley how to code. At the Grace Hopper Celebration in 2016, which is the world’s largest gathering of women technologists, Yañez spoke about the difficulties of teaching boys and girls together.

“I found that the girls, especially in middle school wouldn’t speak up, they wouldn’t participate, they were a lot less engaged,” she said. “I found that the boys were doing everything, and the girls weren’t doing anything. So I had to separate them. We could reintegrate them in high school, because then they had the confidence to say ‘wow, I’m so good at this, this is for me’. But they have to go through that period of empowerment and building confidence and realising that they themselves can do it. Especially latina girls who are taught to stay quiet in the home and the boy takes the lead, they just flourish when they’re on their own.”

Laboratoria is thriving as a company and has plans to expand across the continent, but Rocha said the mission is to work solely with Latin American women.

“This doesn’t mean that we can’t provide opportunities for these women all over the world,” Rocha said. “We’ve put Laboratoria graduates in American and European companies. A personal dream I have is to work with Latin American communities all over the world. It’s not crazy to think that we could have schools in Miami, LA, Spain, or wherever these communities exist.”

Although her ability to believe in a future of perfect gender equality varies from day to day, Rocha does believe that gender is given far too much emphasis in our society. When asked if some jobs are out of reach for certain genders due to biological limitations, she rejected the idea out of hand, explaining that gender is a social construct, and biologically there are tall, strong women, and small, weak men.

“I think that limiting someone’s development, whether it be personal, emotional or professional because of the sex or gender is ridiculous,” she said.. “Everyone sets their own limits, it’s their development as a person. It is that individual who decides what they are capable of doing”

Much progress has been made in terms of women’s rights, but women still have a long way to go before they reach equality, and this situation is even more difficult in South America, where gender roles have little flexibility. Rocha and the rest of the team at Laboratoria are working to give these women the help they need to realise their potential, and create an empowering environment for where they set their own limits, if any at all.