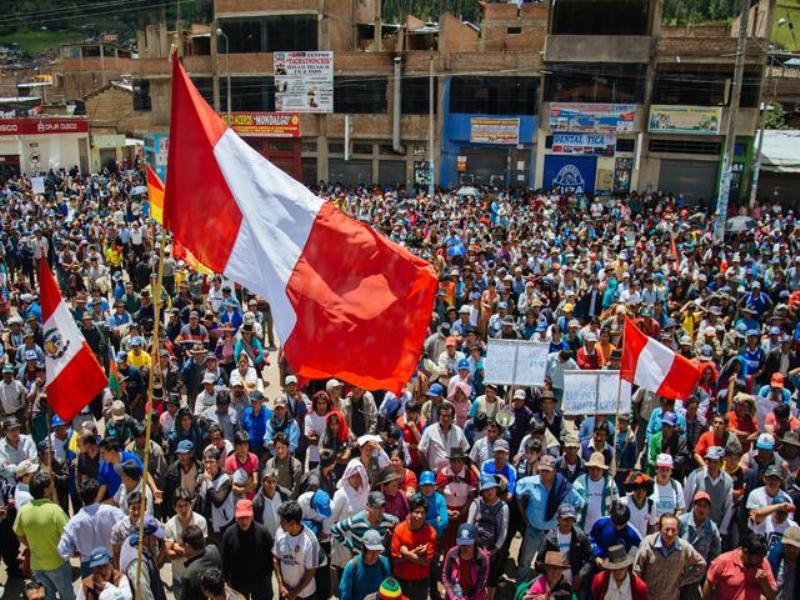 The Peruvian government has stepped in to negotiate after daily protests resulted in looting and violence in Apurimac department.

Over 10,000 local residents have marched against local electricity company, Electro Sur Este. The protests started last Thursday in Andahuaylas, where the company is headquartered. The protests then spread to Chincheros and Abancay in what has become regional unrest.

Apurimac’s regional governor requested intervention from the national government after 13 were injured in Chincheros, where police fired bullets and tear gas in physical confrontations with protesters. Over 20 have been injured throughout the region.

According to energy and mines minister, Rosa Ortiz, a preliminary agreement has been reached with local residents. She and prime minister, Ana Jara, are willing to sign the agreement once protestors end the demonstrations.

Concessions in the tentative deal include a temporary suspension of housing security tax, the reimbursement for equipment damaged by electricity shutoffs and a restructuring of the government’s local energy and mining supervisor.

The protests were inspired by an error in Electro Sur Este’s billing statements. After billing for only 25 days in December, the company sent statements charging for 35 days in January.

Peruvian law requires that billing statements include charges for no less than 28 days and no more than 33 days. Also, the balance not charged for December should not have been transferred to January in its entirety. The law requires that the difference be made up over ten monthly statements after prior notice is given to the consumer. Government officials are working to assess fines for the company.

“The billing statements are accurate, but not right,” said Washington Valdivieso, a representative at Peru’s Supervising Body of Mining and Energy Investment. “It should definitely lead to a stiff penalty … What happened is a rip-off, an illegal amount.”

Over 10 were injured after police tried to clear roads in Chincheros. One protestor lost an eye when police fired tear gas and bullets to disperse the crowd. In Andahuaylas, protestors looted the Electro Sur Este company headquarters and tried to burn one of its vehicles, but were repelled by police. During the protests, the mobs destroyed water lines from the municipal water company, cutting off water to the province.