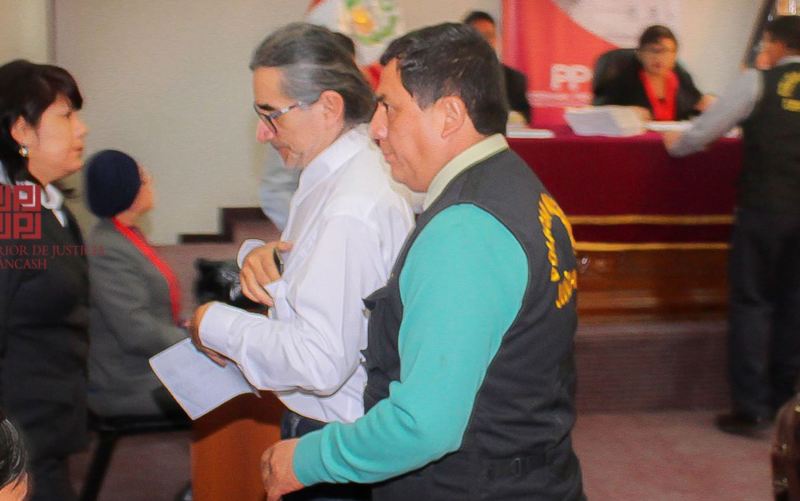 Waldo Rios, governor of Peru’s northern Ancash state, was sentenced to five years in prison on Friday for collusion in awarding public contracts.

A court in Ancash sentenced Rios to five years in one of three corruption charges the former governor faces from his time as the provincial mayor of Huaraz, a tourist destination and mountaineering hotspot in the Cordillera Blanca mountain range.

The trial which ended last week focused on spending irregularities in contracts awarded for electricity projects in several public squares and avenues in Huaraz. Prosecutors are seeking a total of 15 years in prison for other cases against Rios which allege embezzlement, misuse of public funds and forgery.

After complaining of chest pain at the reading of his verdict, Rios was transferred to a local hospital. Once he was cleared, he was moved to serve his sentence at a prison in Huaraz. He was also fined $2,400 and restricted from running for public office for three years. Two other officials from his administration were also found guilty in the same trial.

Deputy governor Enrique Vargas assumed the governorship for the second time upon Rios’s removal from office. Vargas acted as interim governor for five months in 2015 while Waldo Rios scrambled to pay over $300,000 in criminal fines to become eligible to assume office after winning the state election in 2014.

Rios rose to national infamy as one of the “defector congressmen” who switched to the party of President Alberto Fujimori in the late 90s in exchange for a cash payment from spy chief Vladimiro Montesinos, which was made public in the “Vladivideos” videotapes.

Rios had not paid the fine from that case when he won the 2014 state election in Ancash after a controversial campaign in which he promised to give every family in the region $160 per month. Adjusting for U.S. population and minimum wage, the offer would be similar to a politician offering every family in Wisconsin $800 per month.

Rios was immediately the subject of scrutiny from prosecutors and a media suspicious of how he had raised the $300,000 to pay the fine, assuming he would use his power as governor to reward his backers.

Rios failed to deliver on his promise of paying $160 to every family after assuming office, prompting a wave of discontent. In August 15,000 Ancash residents signed a recall petition against him. Meanwhile, conditions in the state deteriorated. A crime wave of extortion and murder prompted the declaration of martial law in the Santa and Casma provinces which include the state’s largest city of Chimbote.

“The provincial mayors are very concerned because there is no will to solve the pending problems of the previous administration,” Santa mayor Victoria Espinoza told Correo. “Public works have not continued, they’re trying to pay for new records and everything is just stagnant.”

The emergency decree putting Chimbote under martial law has been continuously extended since last December, along with Lima’s port district of Callao, and is still in effect today.

Rios is the third consecutive Ancash governor to be removed from office for committing crimes. In 2014 Cesar Alvarez was jailed for allegedly running a corrupt political machine engaged in embezzlement and murder. In 2004 Freddy Ghilardi was removed for almost a dozen charges including embezzlement and forgery.

With a moderate population just over 1 million, Ancash enjoys some of the highest mining royalties in Peru.