What are locals saying about Peru’s Tia Maria copper project? 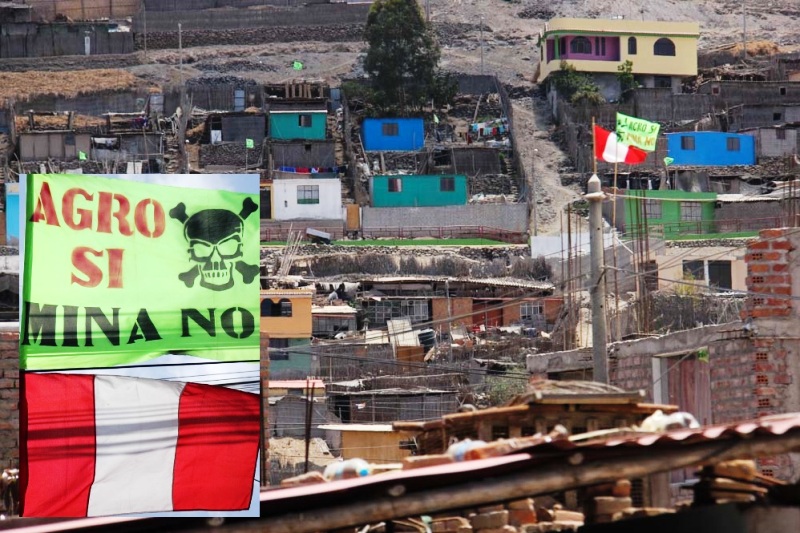 The state of emergency which implemented martial law in Arequipa’s Islay province expired over three months ago. A widening corruption probe into the anti-mining leadership seems to have sapped the public will to resist. But what do local residents say now about the Tia Maria copper project?

Above Sonia Capizo’s house flies a bright neon-green flag, on which is spray-painted the slogan, “Yes to farming, no to mining.” The flag’s font is blocky and militaristic, but Capizo is hardly aggressive. She is a farmer and cosmetologist in the small community of La Curva, 12 miles from the proposed mine.

Sitting in her living room with her 10-year-old daughter, she explained how adamantly opposed she is to both the mine and Southern Copper, the company behind it. “They lied from the beginning,” she said. “They came and thought that since we’re a small, isolated town, they underestimated us. They thought we were ignorant.”

“It’s like they’re tying our hands,” Capizo said. “We were born in agriculture, we grew up and studied and taught it to our children. It’s how we make a living.”

She recalled that farmers near Southern’s Toquepala mine, which opened roughly 120 miles east of La Curva in 1960 and saw vast expansion in the 1990s, can no longer grow olives or sweet potatoes because of the smoke pollution.

“The science is better now,” Capizo conceded, “but if it’s an open-pit mine, there will be contamination.” She is concerned that, within a decade, “there will be just a few trees—all dirt.”

But while she belongs to the louder side, it is not the only one. Roughly half of the Tambo valley locals who spoke with Peru Reports in mid-October remained staunchly opposed to the mine, but the other half was split. About as many stated they were neutral as those who support it.

It is unclear if Tia Maria’s proposed start date in early 2016, which has already been postponed several times, will still go through. The government has acknowledged how difficult that would be.

“It is a social issue now,” Peru’s ombudsman Eduardo Vega said in a recent interview with Gestion. “The state did not use all the tools at its disposal to say there is a social development agenda as well. All these factors make the project, in my opinion, socially unviable right now.”

The issue strikes at deep-seeded concerns about health, safety and the economy. Would a nearby mine really ruin farmers’ careers, or would losing the $1.4 billion project contribute to the stagnation of Peru’s economy?

Capizo’s opinion is shared widely throughout the valley. In Cocachacra, an elderly couple who run a general store said they aren’t against mining in general. They only oppose a mine this close to their home. “Southern should go somewhere else,” the woman said. “This valley is productive, it gives life. Maybe this is a test from God: Do we want gold or food?”

The couple who wished to remain anonymous are not only worried about local farmers, but the area’s entire economy.

“Once the mine’s here, it will be difficult to sell our houses,” the woman continued. “In five years, do you think Southern will buy our houses? They’re going to leave us. So the mine needs to leave.”

She also alleged that representatives from Southern visited them, “trying to give us paint, notebooks, pens … They think they can buy us.”

In addition to corruption, there is a strong local feeling that a mine would bring prostitution, drug trafficking and gambling — hallmarks of a sleepy community woken up by an industrial boom.

“As you can see, it’s calm and safe here,” said one elderly woman at Cocachacra’s central market. “The mine will bring new people, prostitution and crime.”

According to several locals, by early October there were rumors of a renewed strike in opposition to Tia Maria. But those rumblings have been simmering for the past few weeks and have mostly died down, according to Paola Cano, a secretary at a heavy machinery company in Cocachacra.

Cano herself is neutral, but she believes the mine will go forward once Southern informs the public more of their plans.

“Since they’re doing campaigns now, people are realizing that the mine will benefit them,” she said. “The people are a little sensitive here in Cocachacra. If [Southern] had come before the two months of strikes and deaths, I think the people would have listened. I think now the people are resentful and hurt.”

Southern Copper has recently changed tactics. Rather than pushing forward with the government’s support, they have begun to focus on community involvement, employing 30 representatives to knock on doors in and around Cocachacra to assuage locals’ fears one person at a time.

According to Guillermo Fajardo, Tia Maria’s director of institutional relations, only 400 of the 3,000 homes they visited declined to speak with them. He sounded pleased with that ratio. According to him, the majority support the project, albeit quietly for fear of violence.

“There was a woman who wasn’t against the mine,” Fajardo recalled. “They brought her to the plaza, stripped her clothes and cut her hair off.”

Indeed, there are no flags waving support of the mine. And not a single proponent Peru Reports spoke with was willing to offer their name, citing safety concerns. But their opinions are just as strong.

“Everybody’s against it, and they’re vandalizing houses of the people who support it,” said one farmer from Cocachacra. “I’m for the mine, and here they don’t respect others’ opinions.”

The farmer also believes the mine will eventually proceed. “I don’t think the protests will come back,” he said. “They lost their strength. The people realized that the mine is going to go forward anyway. They also realize it’s the future, it’s progress.”

Fajardo recalled that, in early October, some activists tried to protest again, but only 15 people showed up. To him, that signified the loss of momentum for the anti-mining side, especially after the high-profile arrest of disgraced protest leader Jose “Pepe Julio” Gutierrez, who was caught on tape asking for a bribe to end the protests.

Regardless of their position, every local we spoke with chastised Gutierrez. “All our lives we knew [Gutierrez] was a crook,” Capizo said. “He’s always been a crook. He’s never been a transparent person, but a corrupt person.”

“There is a lot of distrust among the people, not only of companies but also the authorities,” Fajardo said. “So to regain the trust of the people, the farmer is thinking about his next harvest. He’s not thinking about five years down the line. So we have chosen short-term projects with an immediate effect.”

Rather than focus on promoting their long-term projects such as water treatment and sewage plants, the company has begun to create immediate changes, such as investing $200,000 to renovate a church in the Dean Valdivia district.

As for allegations that Southern representatives tried to buy individual members of the public, Mr. Fajardo outright denied it. “Opponents always say we are trying to buy their approval,” he said. “We don’t buy approval, because there is no approval market.”

Beyond the Tambo valley

Outside the Tambo valley, anti-mining sentiment weakens a little. In the port city and beach town of Mollendo, an hour’s drive from Tia Maria, there are far fewer neon green flags flying, despite locals importing many fruits and vegetables from the valley. The mine’s potential impact seems farther away. Many vendors at a  large central market in the downtown either support the mine or remain hesitantly neutral.

“Mollendo needs the mine,” one fruit vendor said. “There will be new opportunities for everybody. If a few big companies come, Mollendo will grow. Because right now the only attractions are the beaches. The rest of the year it’s dead.”

She trusts that Southern will employ modern environmental engineering to cause less pollution than there has been in the past. A fish vendor a few stalls down agreed, condemning the strikers and hoping that progress would wake up the sleepy port city.

Ultimately, however, the strength of public opinion may not be able to prevent industrial progress. Even some who oppose the mine or are neutral believe that Southern Copper will eventually win, despite popular sentiment.

“Only a minority support the mine,” said Jacqueline, an employee at La Curva’s health center. “We’re supposedly a democratic country, so the government should listen to the people’s opinion.”

Nonetheless, she believes the mine will move forward once people realize how much time and money Southern is investing in environmental studies. “If we don’t have a good understanding about how the mine will affect the environment, the people are not going to accept mining.”

Others, of course, will never be convinced. “What are our children and grandchildren going to do? What are they going to eat?” asked one woman at Cocachacra’s market. “The mine is a crime.”