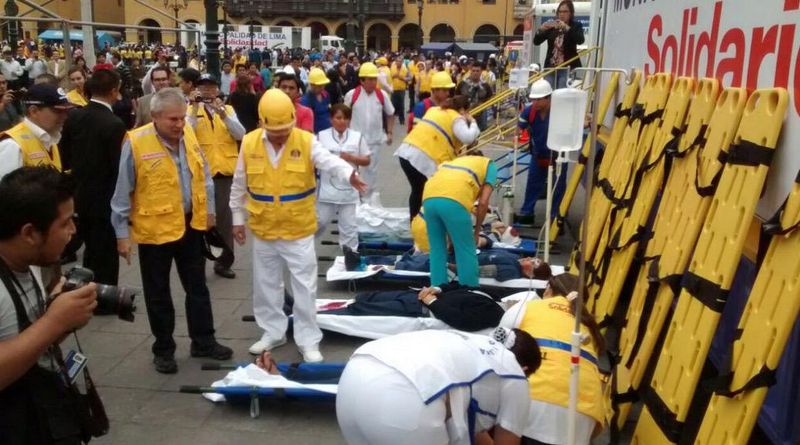 The city of Lima and greater Peru participated in the first national earthquake drill of 2015 yesterday.

Students and employees at schools and offices evacuated buildings at 3 p.m. yesterday in an exercise that simulated a two-minute earthquake with a magnitude of 8.5 and a depth of 25 miles. The Metropolitano bus rapid transit stopped service for ten minutes. Police and first responders near the Carretera Central highway reacted to an event of falling rocks and boulders on the crowded thoroughfare.

The coastal districts also prepared for a resulting tsunami. In the La Punta district of Callao, residents practiced vertical evacuation by moving to the rooftops of 19 neighborhood buildings which would resist a large earthquake.

Yesterday’s was the first of four earthquake drills to be held this year, two of which will be held only in Lima. The drill comes one month after an earthquake in Nepal killed over 8,000 people.

A 2010 New York Times article which warned of disaster in Nepal also names Lima as a risky capital city. “Without vastly expanded efforts to change construction practices and educate people, from mayors to masons, on simple ways to bolster structures, Haiti’s tragedy is almost certain to be surpassed sometime this century when a major quake hits Karachi, Pakistan; Katmandu, Nepal; Lima, Peru; or one of a long list of big poor cities facing inevitable major earthquakes.”

A recent New York Times article names Lima again. “Tehran; Haiti; Lima, Peru; and Padang, Indonesia were similarly vulnerable. In those places, nearby tectonic faults are under strain, and building standards and disaster preparations are seen as inadequate.”

The entire country of Peru is located in what seismologists have named the Ring of Fire or Circum-Pacific belt, a semicircle of regions spanning the western coasts of the Americas to the eastern shorelines of Asia and the south Pacific. About 90% of the world’s earthquakes occur in the Ring of Fire.

According to the Japanese-Peruvian Center of Seismic Investigations and Disaster Mitigation (CISMID), 200,000 homes would be destroyed and 30,000 people killed in the event of an 8.9 earthquake in Lima. There have been 98 earthquakes in Peru in the first three months of 2015.

According to the nonprofit organization ShakeOut, whose goal is to educate and prepare for earthquakes, the appropriate action to protect yourself in an earthquake is to “Drop, Cover and Hold On.” Get on the floor underneath something sturdy in case the building collapses and hold on to the object until the shaking stops.

DROP, COVER, AND HOLD ON! (ShakeOut)