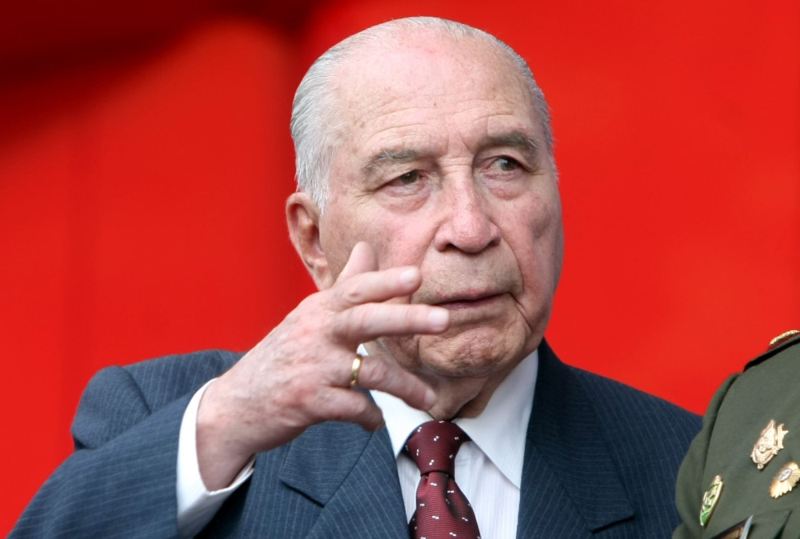 A court in Italy on Tuesday sentenced Peru’s former President Francisco Morales to life in prison for the murder of 23 Italian citizens.

Morales was one of eight military figures sentenced to life in prison for the forced disappearances of 23 Italian dissidents during an era of dictatorships in South America. The other figures include Peru’s Pedro Richter and German Ruiz, Bolivia’s former President Luis Garcia and Luis Arce, Uruguay’s Juan Carlos Blanco and Chile’s Hernan Ramirez and Rafael Ahumada.

“My father is calm, but obviously outraged, because Peru was never in Operation Condor,” Morales’s son told RPP. “The Italian judiciary never sent a single letter, not a a single document, for them to comply with due process.”

Morales allegedly participated in Operation Condor, a regional conspiracy in which governments in  Argentina, Chile, Uruguay, Paraguay, Peru, Bolivia and Brazil cooperated in repressing and killing dissidents. Some estimate that as many as 60,000 people were killed across the region.

Morales’s lawyer Luis Vargas told El Comercio that his client is ineligible for extradition in this case. Others say the 95-year-old Morales cannot be extradited due to his age.

“[Morales cannot be extradited] for a series of errors that have been observed in the case in Italy,” Vargas said. “The Italian justice system did not call on General Francisco Morales. In this sense, it is clear that his right to due process has been violated in this process.”

“For humanitarian reasons, there would be no legal basis for a person over the age of 90 to be extradited to serve a sentence in a different jurisdiction. They will only give him a symbolic sentence. It will not be served,” legal expert Luis Lamas told Correo.

“For us, the Italian sentence is emblematic because, despite the time that’s gone by, it tells us that justice is served, even if it takes time, and those who have committed crimes and attacked the lives of Peruvians and citizens from different parts of the world have to pay for their actions,” National Coordinator of Human Rights (CNDDHH) executive secretary Jorge Bracamonte told Andina.

Bracamonte added that, while Morales would probably not be extradited to Italy, the sentence itself was importance for its symbolism.

Morales is currently facing kidnapping charges in Peru for the forced exile of 13 Peruvian dissidents to Argentina in 1978.

In 1975 Morales led a coup against Peru’s leftist dictator Juan Velasco, who had seized power via coup d’etat in 1968. Morales gradually shifted emphasis from socialism to a handover of power to civilian government. Democratic elections were held in 1980.