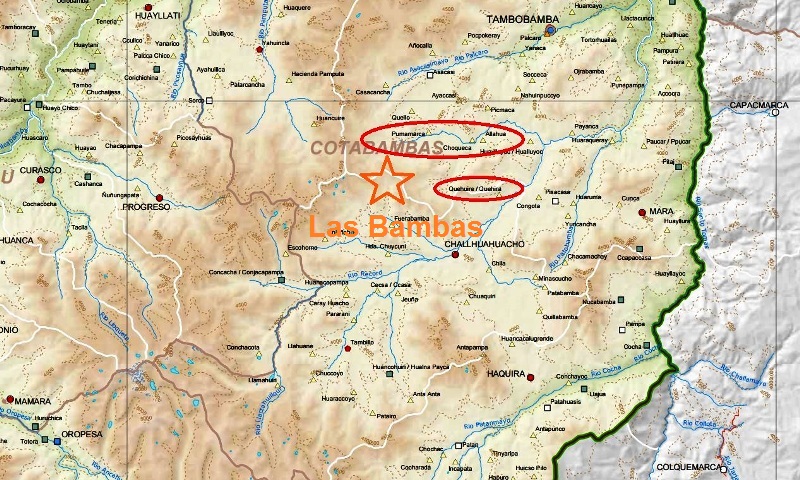 The future of shipments from the Las Bambas copper mine hinge on whether four villages in Apurimac accept the government’s offer of a 45-day truce.

Copper concentrate has not left Las Bambas since local residents blocked the roads leading to and from Peru’s largest copper mine last week, when clashes left one protester dead and 20 police injured. A government delegation led by Vice President Martin Vizcarra requested a 45-day “truce” on Saturday to allow trucks to continue shipping as the government reviews the community’s list of demands.

While more than 80% of the Cotabambas province population has accepted the truce, the Quehuira, Ayahua, Choqueca and Pumamarca villages which are located closest to the mine in the Challhuahuacho district rejected opening the roads for MMG to continue copper shipments out of the mine en route to a seaport in southern Peru.

“We are continuing the protest until our requests are resolved. We are tired of dialogue tables and truces,” Quehuira village leader Raimundo Letona told La Republica.

“The politicians gave the vice president a deadline, but we don’t support that because they didn’t talk to us,” Pumamarca village leader Juvenal Huamani told Peru 21. “We ask that they respond to our request and that we be compensated accordingly.”

Choqueca leader Timoteo Noa told La Republica that his village was entitled to a payment for use of the public road due to the environmental damage that the daily passage of hundreds of trucks causes to the agricultural community.

Cotabambas provincial mayor Odilon Huanaco is trying to convince village leaders to accept the truce as the national government and MMG analyze the community’s submitted list of 170 requests for projects and programs approved by the previous government. Until then, the road has been opened to passengers and shipments of food and fuel, but not the MMG trucks transporting copper.

“We believe the problem can be solved but working with complete seriousness, because we are talking with the people from the poorest province in Peru and we have to change that,” Vice President Martin Vizcarra told Cuarto Poder. “[They] have little confidence because [the government] has failed them many times. We cannot fail them again.”

“We have spoken directly with the leaders and the people. I understand their problems because I was also leader of a region which, like them, demanded respect,” Vizcarra added in reference to his experience as Moquegua governor. “Public works have been waiting. That’s the complaint I received from the three roundtables, with commitments totaling more than $300 million.”

Vizcarra said that most of the demands related to paving the access road as well as expanding water service. Most of the Cotabambas residents have no running water.

While four villages rejected the truce, six villages which had participated in the protest did accept the truce and have left the road. MMG issued a statement today saying it believed the protest would be lifted and copper shipments would resume.

“Concentrate trucking is expected to resume progressively in the coming days and shipments from the port of Matarani should recommence during late October or early November when sufficient quantities of concentrates have been delivered to the port,” the statement says.

Three protesters were killed in protests against changes to Las Bambas’s environmental impact study last year, prompting former President Ollanta Humala to declare martial law for 30 days. The renewed conflict is the first for President Pedro Pablo Kuczynski, a Cabinet chief and investment banker who has promised to improve the lot of rural communities near extractive projects.

Social conflicts around mining and energy projects, especially those which require use of local water sources, continue to be one of Peru’s greatest economic challenges. The previous government saw the indefinite stoppage of the $4.8 billion Conga gold mine in Cajamarca and the $1.4 billion Tia Maria copper mine in Arequipa.

A BBVA Research report said that the $10 billion Las Bambas copper mine, which will become the world’s second largest when producing at capacity, will contribute 1% to 1.1% of Peru’s annual GDP, and that if production halts then the GDP growth in 2016 will be reduced from 4% to 3.7%.

This article will be updated as the story develops.