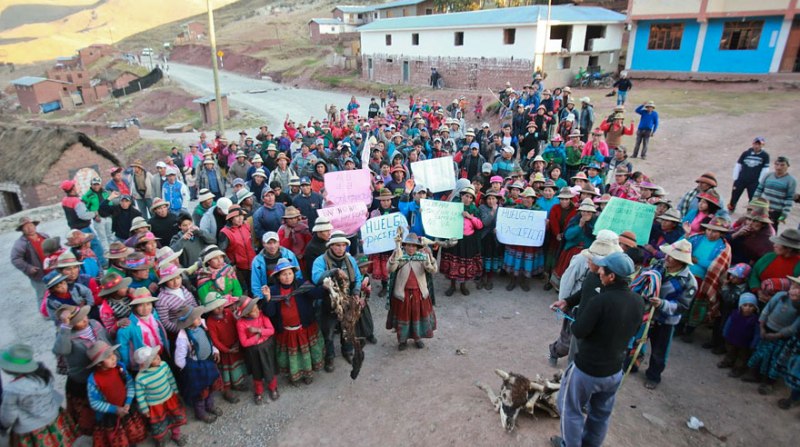 Environmental organizations announced a temporary lifting of an indefinite strike against the Las Bambas copper mine project in southern Peru.

Leaders of various social organizations protesting modifications to the Las Bambas environmental impact study have lifted their indefinite strike for 24 hours to give Peru’s government agreed an opportunity to establish dialogue with the protesters.

A coalition of protest leaders sent a letter to Cabinet chief Pedro Cateriano requesting that he, mining and energy minister Rosa Ortiz and environmental minister Manuel Pulgar schedule talks within the 24 hours.

The letter requests the lifting of a state of emergency declared by President Ollanta Humala’s government after four protesters were killed in clashes with police on Friday. The protesters also demand the release of 21 protesters who were jailed on Monday.

“Fortunately, good sense has prevailed,” said Apurimac governor Wilber Venegas. “Yesterday the defense front showed its willingness to negotiate and the government has also shown its willingness to talk, and the strike has been temporarily suspended.”

Venegas highlighted that the protesters are not opposing the existence of the Las Bambas mine, but the recent modifications to the environmental plan.

Local leaders from the Cotabambas and Grau provinces called an indefinite strike last Friday in protest of changes to the Las Bambas environmental study. They take specific issue with the cancelling of a mineral pipeline to transfer the copper, without which will be transported by dozens of trucks every day. The local communities also oppose the construction of a molybdenum plant which could contaminate the area and the Challhuahuacho river.

The mining and energy ministry counters that the modifications to the environmental plan only require consultation with the local population’s elected leaders. The mineral pipeline was planned to deliver copper to a Cusco facility owned by Glencore Xtrata, which sold the Las Bambas project to the Chinese-Australian venture MMG in 2014.

A letter issued today by Cateriano did not detail when or which government ministers would visit Apurimac state to participate in talks. While Cateriano appears to agree to talks, he also criticized the environmental organizations which organized the protests.

“We strongly condemn the use of violence,” Cateriano said. “We cannot accept illegal mechanisms such as kidnapping or using dynamite and guns to supposedly defend local or environmental rights.”

“At all times the government has been in communication with local authorities who duly represent the people of Apurimac having been elected by popular vote,” Cateriano said. “In a democratic system we must not forget that the form of government is representative, and the mandated authority is elected. So we will not accept defense fronts or groups which use force to pressure and undermine the rights of all Peruvians.”

Protests against the Las Bambas copper project in southern Peru led to clashes with police which killed four and injured at least 23 on Monday. The government has declared a 30-day state of emergency, which restricts constitutional rights as order is restored.

The open-pit Las Bambas copper mine is projected to produce 500,000 tons annually for its first 10 years. Reserves are projected at 6.9 million tons of ore reserve and 10.5 million tons of mineral resource. It will be the world’s second-largest copper mine when at full production in 2017 and account for over a third of Peru’s copper production.