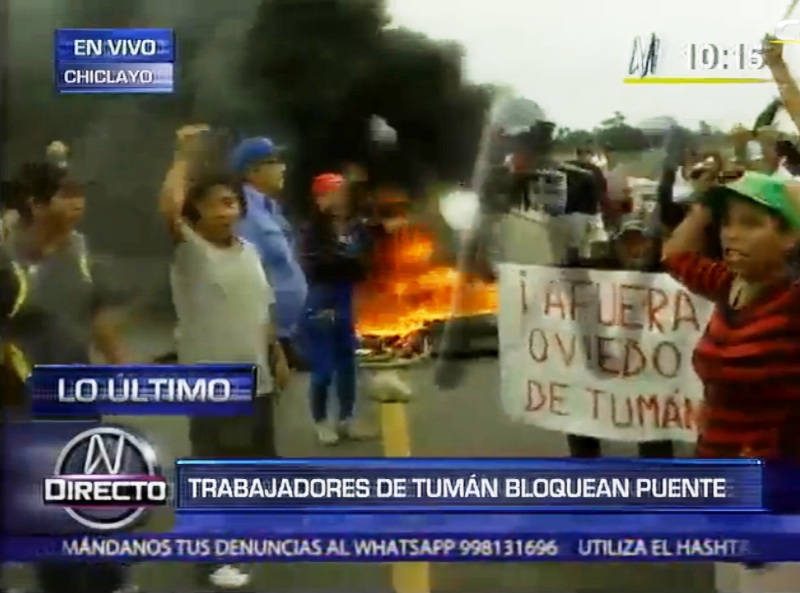 As prosecutors announced an investigation into Grupo Oviedo’s management of a Lambayeque sugar company, hundreds of workers continue to demand the company’s exit.

“While [the company] deliberately did not comply with the payment of the debt principal that put the current management in charge, they caused millions in losses to society,” the district attorney’s statement said.

Osores said exectuives caused the collapse of the company while earning monthly salaries of over $4,000 and generating company debts of $162.8 million in taxes and unemployment insurance payments under the special “Oviedo law,” which effectively exempts the company from paying debts. Osores’s statement also details suspicious policies which incurred millions in losses including a $10.1 million contract to clean company drains, low field productivity, sales exclusivity for Grupo Oviedo subsidiary companies and questionable asset transfers.

“They are acting in retaliation to the refusal [to change management] on the part of the judge, who also ordered that an aggravated robbery be reported,” said Grupo Oviedo lawyer Jose Isla.

Meanwhile, Tuman protests completed their 73rd day yesterday when over 300 protesters blocked the highway between Chiclayo and Cajamarca with rocks and burned tires. Correo reports the mob pelted a police officer with stones.

“We’re not afraid to die,” one protester told La Republica. “If it’s necessary for blood to run in the streets, then let it run, but Grupo Oviedo is leaving Tuman.”

Tuman sugar workers are demanding the exit of Grupo Oviedo and that Empresa Agroindustrial Tuman be managed by the employee shareholders. Union leaders have rejected negotiations with Grupo Oviedo.