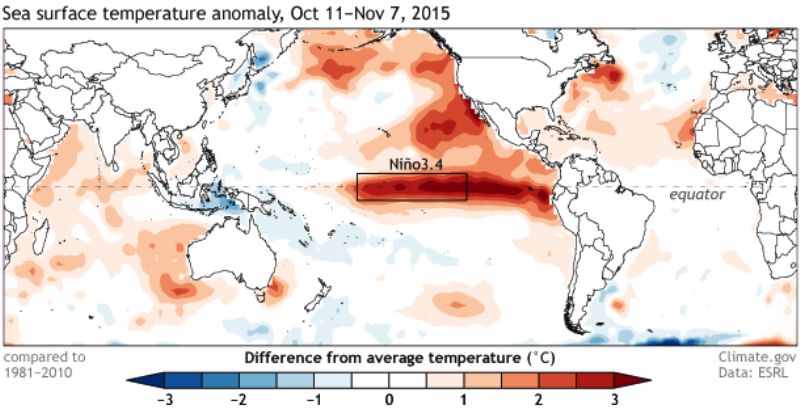 Recent sea-surface temperatures in the Pacific Ocean suggest the pending El Niño climate phenomenon may be the strongest in recorded history.

The U.S. National Oceanic and Atmospheric Administration (NOAA) defines an El Niño phenomenon as five consecutive three-month periods with average sea-surface temperatures a half degree above normal. The most recent data collected between August and October from the El Niño 3.4 region was 1.7 degrees Celsius above normal, the second highest departure in over 60 years.

In 1997 the El Niño 3.4 index peaked at 2.33 degrees above normal in a year Peru saw torrential rains and flooding which caused an estimated $3.5 billion in economic losses.

“Right now we say we think it’s really going to be one of the three strongest ones, it may be one of the two, that we don’t know yet. But definitely it’s already a very strong one,” said Michel Jarraud, secretary general of the World Meteorological Organization (WMO). Jarraud added that climate change may play a role in intensifying El Niño.

“This event is playing out in uncharted territory. Our planet has altered dramatically because of climate change,” Jarraud said. “So this naturally occurring El Niño event and human-induced climate change may interact and modify each other in ways which we have never before experienced.”

Peru’s weather service SENAMHI assigned a 50% probability that this El Niño will be “strong” or “extraordinary” before the most recent sea-surface temperature data. Their next report is due next week.

Housing minister Francisco Dumler estimated that Peru’s government has spent over $1.3 billion in reinforcement projects to withstand torrential rains and flooding from the event. Most of the works are distributed through the northern coastal states of Tumbes, Piura, Lambayeque and La Libertad, which are expected to be most affected.

In addition to the risk to infrastructure and the economy, the northern states and especially Piura face a renewed outbreak in dengue and other mosquito-borne illnesses which caused a health emergency in the region this year.

The El Niño climate phenomenon is a cyclical change in ocean temperatures which cause torrential rains and flooding in Peru and Ecuador between the months of December and March. The strongest events in recent history occurred in the South American summers from 1982 to 1983 and 1997 to 1998.

Economists estimate that a strong or extraordinary El Niño event could cause Peru’s GDP growth in 2015 to be restricted by one to two percentage points.

El Niño strengthening, will be among biggest on record: WMO (Reuters)