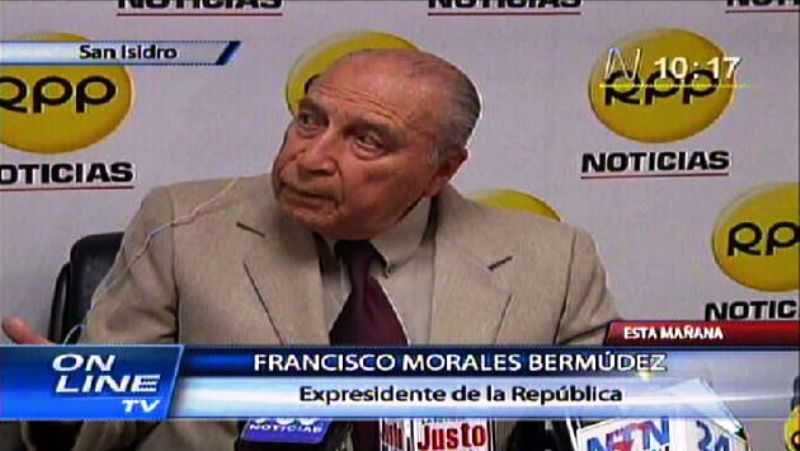 A judge in Peru has charged former President Francisco Morales and three others in the 1978 kidnapping and forced exile of 13 Peruvian citizens.

In 1978 Peruvian security forces detained 13 activists, including three journalists, and flew them on a military plane to Argentina. They were received by Argentina President Jorge Rafael Videla, who under international pressure forced them into exile in Mexico and Europe.

Videla was a key leader of Operation Condor, in which right-wing dictators of South America collaborated to suppress communist influence in their countries.

Morales was charged with crimes against humanity along with two of his Cabinet ministers and the pilot who flew the detainees to Argentina.

Morales and 31 other military leaders from South America are currently in trials in Rome for the deaths of 20 Italian citizens. The 93-year-old Morales has declined to appear and is represented by a public defender.

As an army general stationed in Tacna, Francisco Morales took power in 1975 in a coup against President Juan Velasco, the leftist military general who had seized power from the democratically-elected President Fernando Belaunde seven years prior.

Military leaders backed Morales’s coup as Velasco showed inclinations of refusing to relinquish power at a time when the economy was starting to deteriorate after his regime’s mass nationalizations of private firms in construction, agriculture, mining, fishing, travel and more. Violent strikes and protests rocked Lima in the mid-1970s as consumer prices rose and industry efficiency plummeted.

By 1978 Morales’s term, known as “Phase 2” of the military’s rule from 1968 to 1980, had shifted focus away from socialist revolution as leading generals decided to return control of government to civilians in a dignified way. Hence Morales’s cooperation with South America’s right-wing dictators in Operation Condor marked a clear departure from the military government’s prior economic goals.

Elections were held in 1980 and Peru re-elected Popular Action candidate Fernando Belaunde, whose first move was to return the newspapers and media to the private owners from whom they had been expropriated.