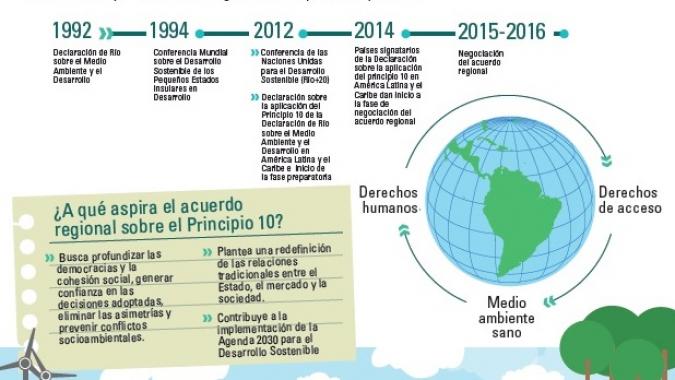 A historic treaty has been agreed upon in San Jose, Costa Rica this weekend to provide protection for environmental activists and “democratize” environmental issues in Latin America and the Caribbean.

The agreement is the first to legally define the phrase ‘environmental democracy’, and focuses on nature and the environment as a public entity, accessible to all. The spokesperson of the conference told The Economic Commission for Latin America and the Caribbean (CEPAL) in an article that it is necessary to involve everyone in these issues, as “the right to a clean environment is a human right.” The agreement hopes to enable citizens to access public information about environmental issues, require communities to participate in decision-making on projects that affect their regions, and encourage citizens to fight for justice when it affects their ecosystems and their way of life.

Another unprecedented element is that it provides protection for environmental activists. The National Coordinator for Human Rights in Peru states that between 2002 and 2014, at least 47 activists were killed. A report by the same group, called Peru’s Deadly Environment, also describes how four indigenous leaders in the Amazonian region of Ucayali were kidnapped and assassinated as they traveled to attend a meeting about how to combat illegal logging in their region in 2014.

This new agreement will protect the rights of indigenous people in their pursuit to protect their communities, and to allow activists to do their job without fear of violence or threats.

Twenty-four countries from the region spent five days recently in the Real Intercontinental Hotel of San Jose negotiating the final wording of the agreement.

The idea for this region-wide treaty came about at the United Nations Conferences for Sustainable Development, or Rio+20, which took place in 2012, and created the Principle 10 of the Rio Declaration. CEPAL describes that declaration as one which looks to ensure that any person can have access to information, can participate in decisions and have access to justice in environmental concerns, with the aim to guarantee the right to a healthy and sustainable environment for present and future generations. After a six-year period involving nine conferences to negotiate these terms, the work has culminated with this all-important treaty that looks to amp up protections for those trying to defend the environment.

And not before time. ReVista, the Harvard Review of Latin America, describes the region as having the most serious environmental concerns in the world. The air pollution is desperately unhealthy,  many rivers are contaminated by industrial waste and raw sewage, logging and oil production is causing deforestation at an alarming rate.

“Throughout Latin America, environmental problems reflect the clash between the use of nature as a private good with the concept of nature as a public good providing certain functions without which human life is not possible,” ReVista states. And it is precisely this clash that the Principio 10 agreement is trying to reduce.

In a sort of poetic timing, the alleged intellectual author behind the brutal murder of Honduran activist Berta Cáceres was arrested just two days prior to the conference’s conclusion. Cáceres was a notable environmental campaigner who was opposing the construction of a dam when she was killed in March of 2016.

The agreement will be available to be signed over a two-year period starting September of this year. The group hope to have the full 25 signatures by this time, but only 11 are necessary for the agreement to come into force.