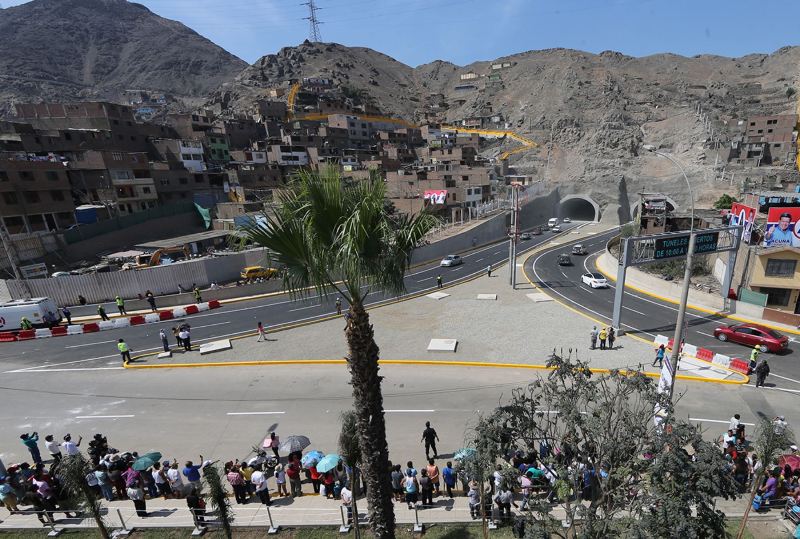 The city of Lima has opened the Santa Rosa and San Martin tunnels to connect the San Juan de Lurigancho and Rimac districts.

The project featuring two 800-foot tunnels in the Santa Rosa mountain will connect the low-income San Juan de Lurigancho district, which is home to over 1 million people, with the Rimac district just north of downtown Lima. Each tunnel features two lanes, a bike path and a sidewalk.

The inauguration is a one-month testing phase for light cars and trucks weighing less than six tons. According to Lima mayor Luis Castañeda, this soft open will allow a special task force to get feedback on whether more signage is needed and if public transportation should be given access to the new roads.

“[The tunnels] are very important because it is a way to further connect Lima and reduce mobility time,” Castañeda said in a press conference. “While we have all the studies, they have to be confirmed by actual traffic.”

Without the tunnel, the only way to get to Rimac from San Juan de Lurigancho is either the Evitamiento highway or 9 de Octubre avenue. These routes can take up to 50 minutes during rush hour. Experts say that the tunnels will allow Lima residents to move between the two districts separated by mountains in as little as five minutes.

The west side of the tunnels is less than a quarter mile from Tacna avenue, which will seamlessly connect San Juan de Lurigancho to downtown Lima, Lince, San Isidro and Miraflores via the Tacna-Garcilaso-Arequipa thoroughfare. The connection greatly improves mobility for San Juan de Lurigancho residents to the economic heart of the metropolitan area.

The Santa Rosa and San Martin tunnels have been serially delayed since construction began in 2010, during Castañeda’s previous term as mayor. A 2011 landslide forced mayor Susana Villaran’s administration to reassess the viability of the tunnels. After a new contract was signed in 2012, another landslide in 2013 delayed construction for another year. September 2014 saw another start to the work before a budget increase under Castañeda in 2015.