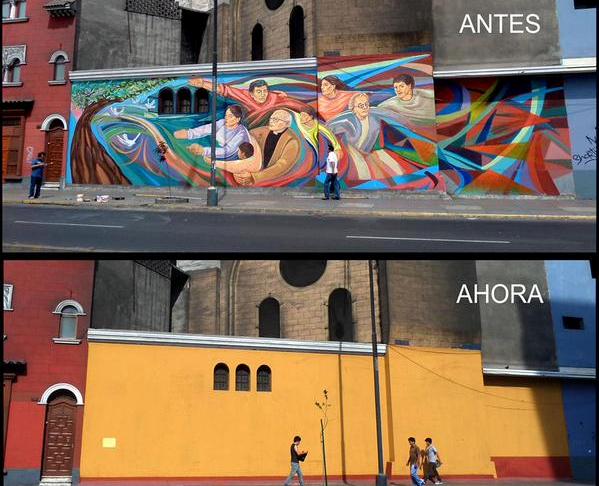 The mayor of Lima has announced his administration’s initiative to remove more than 40 murals in the city’s historic center.

In an interview televised on RPP, Luis Castañeda acknowledged that the city had begun painting over some murals in downtown Lima. Castañeda cited rules for the historic city center to remain a UNESCO World Heritage Site.

Most of the city seems to disagree with the mayor’s actions. A La Republica poll shows 59 percent oppose the murals’ removal. An editorial in the same newspaper argues that the murals do not violate UNESCO’s rules for World Heritage Sites. The director of the Lima Art Museum, Natalia Majluf, also opposes the murals’ removal.

Former Lima mayor, Susana Villaran, responded that UNESCO does not intend for historic city centers “to be museums stuck in the past, but living centers. What would we rather have, dirty walls or art?”

After Castañeda announced his plans to remove the murals, protesters demonstrated in front of some of the sites in the afternoon. But teams of city workers arrived after 10 p.m. with buckets of paint to cover the murals.

Peruvian painter and sculptor, Fernando de Szyszlo, agrees with the city initiative to remove the murals. While he called them “very attractive,” he also said “murals completely deform the architecture and the image of the city.” He added that Lima’s historic city center “deserves respect, care and discretion.”

The most controversial mural was painted by Leonardo Olfer, a member of the political arm of the Shining Path, Movadef. Castañeda produced a document showing the city under Susana Villaran paid Olfer over $2100 to produce the work on Garcilaso de la Vega Avenue.

“What does political propaganda from murderers have to do with preserving the ambiance? Why are we financing Movadef? We will investigate this case in further detail,” Castañeda added.

Some have criticized the mayor’s use of yellow to cover many of the murals. Yellow is the color of Castañeda’s National Solidarity Party.