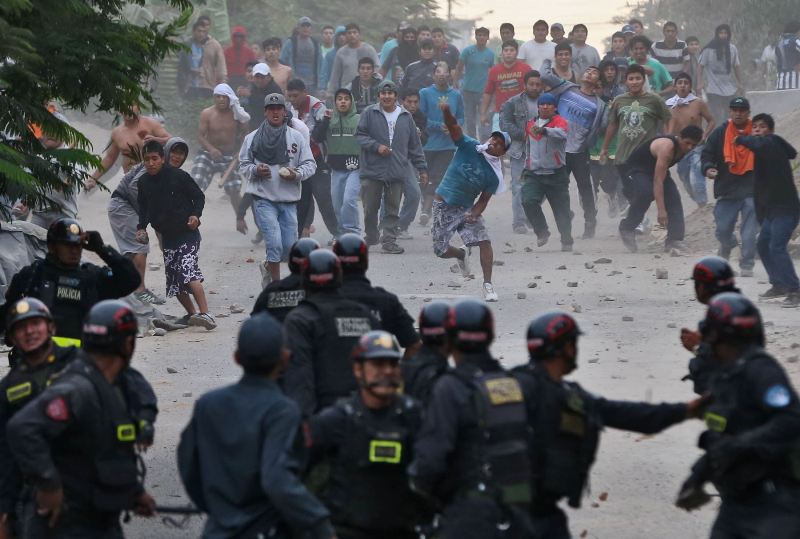 Located in the southern suburb of Villa Maria del Triunfo, the Tablada de Lurin is a 2,000-year-old network of stone tombs. Discovered less than 50 years ago by Peruvian archaeologist Josefina Ramos, the site is among the oldest evidence of pre-Inca civilizations in Peru. The site was declared cultural heritage property of Peru’s culture ministry in 1987.

La Republica reports that land-trafficking mafias organized the invasion with hired thugs. The squatters threw rocks and bricks at police when ordered to leave.

When some gangs of squatters cornered a small group of police, a group of 20 people dressed in orange began to throw rocks at the invading squatters. The group helping the police turned out to be employees of the Cementos Lima plant located nearby.

Police used tear gas to dislodge the crowd and arrested more than 10 by the time they cleared the area.

Many of the squatters hoping to claim plots of land claimed that Villa Maria del Triunfo mayor Carlos Palomino had promised the area would be settled in his election campaign.

“If the mayor promised them that this would be a place to live, as the people say, he would have committed a crime,” a legal consultant with the culture ministry told Andina. “He cannot promise land in an area the he does not have jurisdiction, because it is archaeological and belongs to the Ministry of Culture. The mayor should ask them to leave the area, especially if he made that promise.”

How the Shining Path works with Colombian drug traffickers