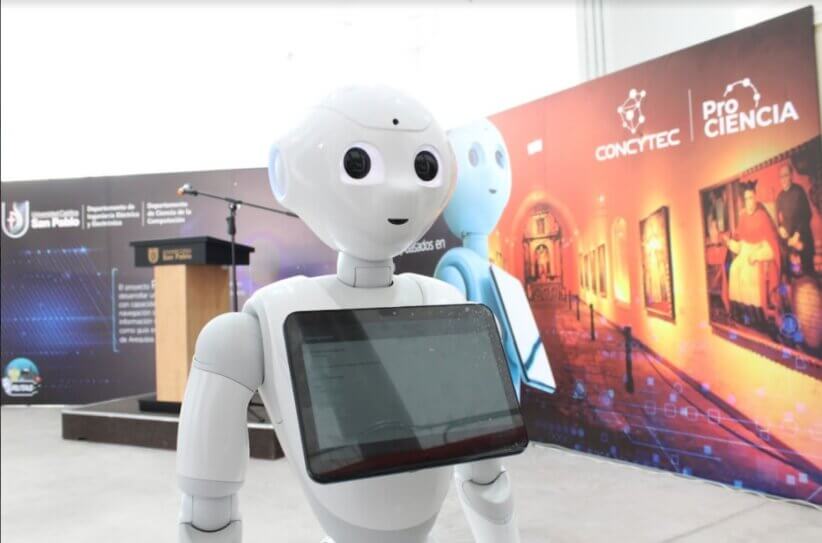 Pablo Bot, Peru’s first robotic tour guide that rolled onto the streets of Lima in June, can tell whether a person or group of people want to be approached for a tour, according to researchers who spoke to Peru Reports.

“The robot analyzes individual and group feelings, and can decide whether or not to reach out to help them,” said Professor Dennis Barrios, director of San Pablo Catholic University’s  Mechatronics Engineering School.

Students from the university presented Pablo Bot during last month’s 2022 Innovation Week in Lima to much fanfare, and the project was financed by the National Council for Science, Technology and Technological Innovation (Concytec) as well as the World Bank.

According to Mr. Barrios, Pablo Bot can “establish a conversation about the objects that are exhibited in a museum, according to the predisposition observed in people,” helping the bot to not only communicate with people, but also to recognize their emotions and adapt its behavior accordingly.

To analyze humans, the robot “uses a built-in camera and artificial vision and artificial intelligence algorithms” to analyze the posture and facial expressions of people to detect their emotions.

Mr. Barrios said the robot is also “capable of detecting group emotion, which is an average of individual emotions. This allows the robot to modify the proximity zones of people so that they feel comfortable.”

Among its software capabilities, Pablo Bot is equipped with an AI-powered chatbot, which allows it to contextualize and store information it gathers on the cloud so that it can be used to teach its robotic descendants in the future.

Pablo is a pretty good driver too. According to Mr. Barrios, the robot “ is able to navigate museums by automatically mapping their installations, even when people and objects are moving.”

Pablo Bot may be coming to other Latin American cities

Plans for the robot don’t end in the halls of Lima’s most popular museums. According to Mr. Barrios, the team from San Pablo Catholic University plans to expand the use of robots like Pablo to other cities in Peru, as well as state of Bahia, in Brazil, while later looking to expand in countries around the globe.

In the near-term, the team is working to expand Pablo’s ability to interact with humans, and also aims to build a version of Pablo that uses 100% Peruvian-made hardware. Pablo Bot is currently built using SoftBank Robotics’s “Pepper” semi-humanoid robot.