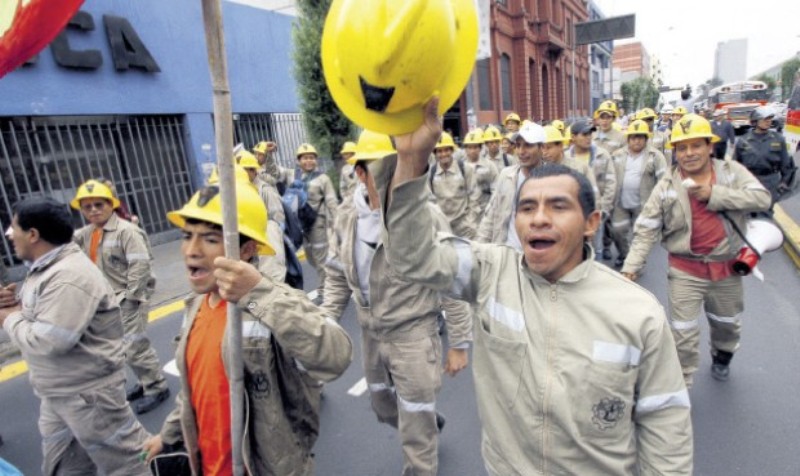 Peru’s mineworkers union federation held a national strike on Monday which had little effect on smaller operations and no effect on the country’s largest mines.

In April the Mining Federation of Peru (FNTMMSP) confirmed a national strike for May 18 to protest various government measures it says weakens collective bargaining rights. FNTMMSP president Ricardo Juarez forecasted that 80% of 30,000 unionized mineworkers would walk off the job at midnight on Monday.

The 70 participating unions demand the repeal of a law that allows mining companies to collectively dismiss up to 10% of their total workforce if financial performance is “distressed” for three consecutive quarters. They also demand the application of a law that regulates third-party companies which provide services to mining companies, and the withdrawal of a proposed bill that would reduce worker benefits and limit workplace inspections.

“They continue dismissing regular workers to replace them with personnel from contractors,” said Marco Sarca, a union leader at Minsur’s San Rafael tin mine in Puno. He added that hundreds of mineworkers have been fired for union membership or for voicing their opinions on Facebook.

While the unions make up a small minority of the mining industry’s 210,000 workers, labor leaders hoped to win concessions at a time when world commodity prices have fallen and the government depends on a mining rebound to support GDP in a difficult year for Peru’s economy.

However mineworkers at Peru’s largest mines did not walk off the job in fear of being dismissed. Union workers at the Yanacocha gold mine in Cajamarca as well as the Antamina copper and zinc mine in Ancash did not participate in the national strike.

Buenaventura’s Uchucchacua silver mine was most affected as only 50% of its workers reported to work. Silver, tin and iron production may have been marginally affected by the strike.