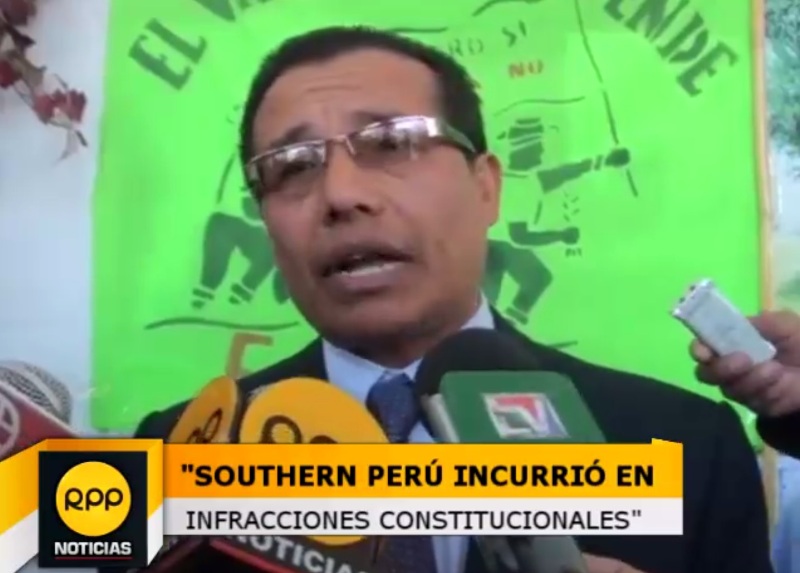 Opposition to the Tia Maria copper project in Arequipa has filed a lawsuit which aims to nullify the mine’s environmental impact study.

A judge in Lima has admitted for review a case brought by environmental lawyer Miguel Callata, who claims that procedural irregularities and infractions should render invalid the Tia Maria environmental impact study approved by Peru’s mining and energy ministry last year.

Nullifying the environmental impact study would effectively set Southern Copper back a key step and prevent construction of the mine.

Callata says Peru’s Environmental Control and Assessment Agency (OFEA) did not approve the drafting of the study. He also alleges forged signatures from foreign nationals.

“The objective of this lawsuit is that the judicial branch analyze the environmental impact study that Southern Peru presented, and consider all the constitutional infractions and illegalities,” Callata said.

In an independent analysis of the study, environmental engineer Otto Hito found 14 boreholes which he says will be used to extract groundwater, as opposed to desalinated water from the Pacific Ocean.

“We are going to show the documents proving the truth that Southern is hiding. We have proof that show their intention to extract water from the subsoil and not from the sea,” he said.

The Tia Maria copper project prompted violent protests which culminated in the government declaring a 60-day state of emergency in the Islay province of Arequipa. The state of emergency effectively allows police and military to implement martial law to restore order.

The state of emergency expired last week, but police and military forces will remain in the Tambo valley through the first weeks of August in case violence returns.

During the state of emergency, Southern Copper opened three employment offices in the Tambo valley.

In an interview with La Republica, anti-mining leader Jesus Cornejo affirmed his opposition to the mine. “I will never sit down with [Southern Copper],” Cornejo said. “For us, the company is an enemy.”

Cornejo added that Tambo valley residents lack adequate representation. “And you think we’re going to allow that the idea of dialogue means accepting [the mine]? That the government is right and the people are wrong. We have to debate.”

Yesterday, Peru’s independence day, a small group of protesters marched against the Tia Maria project in Dean Valdivia. The demonstration was peaceful and surrounded by police in dress uniform and riot gear.

This week three men were arrested for their alleged involvement in the killing of a police officer in Tia Maria riots in May.