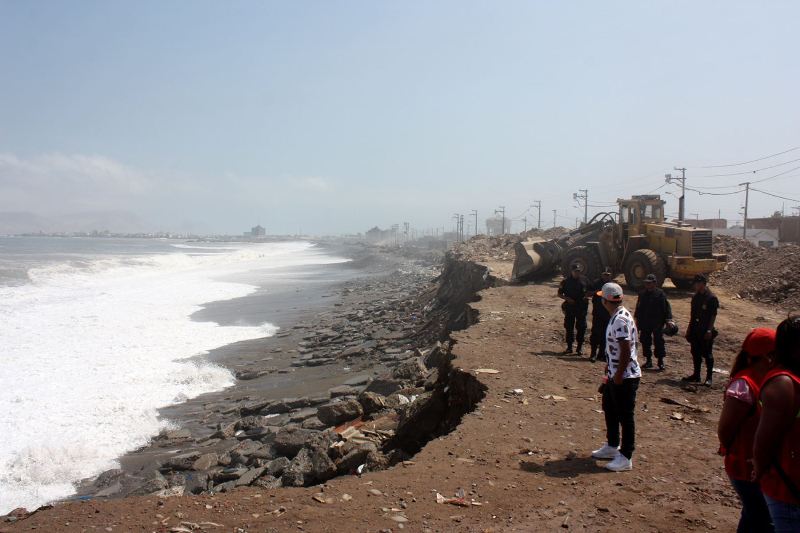 Large ocean swells have caused property damage and disrupted the coastal areas all along the coast of Peru.

The swell originated last Sunday in a storm thousands of miles west of the southern tip of Chile, north of Antarctica. Winds of over 60 miles per hour created 40-foot waves. Four days later, those swells began to arrive on the Pacific coast of South America. The “anomaly swells” were announced by Peru’s navy and started Thursday before intensifying Friday and Saturday.

Fishing and commercial shipping came to a halt as 99 ports and small docks were closed throughout Peru. Only eight seaports stayed open.

The worst damage occurred in the north of Peru. 14 homes were destroyed and 80 damaged in Trujillo. In the nearby beach town of Huanchaco, many of the homes along a major avenue have serious flooding and the Malabrigo pier was largely destroyed. Fifty-five homes were damaged in Chimbote.

In Callao, 19 homes were damaged and many residents slept on the roofs of their houses. Plaza Grau near the seaport was flooded, causing evacuations.

The city of Lima installed seven strategic observation points throughout the metro area with an emergency command in Chorrillos to monitor the coast and identify situations that needed assistance. Large boulders were placed along the shore in Lima and Callao. The rocks were meant to hold the waves back from the Costa Verde highway, but the move aggravated existing demonstrations by surfers and beachgoers protesting the widening of the highway to accommodate an extra lane, which took space away from the beach. Pictures circulated showing police fighting with surfers in the water near La Pampilla beach.

The city briefly closed a southbound lane of the Costa Verde highway in Miraflores after the swells littered it with small rocks. Several homes and streets were flooded in Chorrillos and sandbags were distributed to repel the waters.

In Camana, 120 families saw their homes damaged to the point of being uninhabitable. A local church was also damaged. In Tacna, 13-foot waves prevented fishermen from working.

Chile was also affected, where an Ecuadoran man drowned.

Peru has seen 14 “anomaly swells” in the last 15 years. While it is not uncommon, they typically do not happen more than once in a year. Officials say the worst has passed and water levels will slowly return to normal.

Winds blowing over the ocean create waves that eventually outrun the storm which created them. Swells can travel thousands of miles before reaching shore, where they increase in height as the ground forces the water up. Swell waves are largest in the Pacific Ocean due to the larger areas of open water.