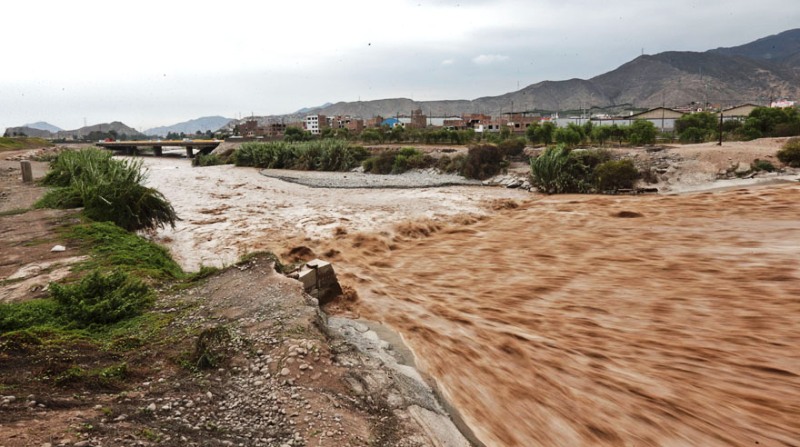 The rising water levels in two of Lima’s rivers from increased rainfall due to El Niño threaten to flood various neighborhoods in five of the city’s districts.

The increased water levels in the Rimac and Chillon rivers due to heavy rainfall from the El Niño climate phenomenon have more than doubled the average amount of water for this time of year.

“The river is reaching levels not seen for several years,” an official with Peru’s weather authority, Senamhi, told El Comercio. “We are confident that with the rainfall in the coming days, will easily exceed 360 cubic feet per second in flow rate. If that happens, a red alert will be declared.”

Flooding will occur once the rivers’ flow rates reach 390 cubic feet per second, which has not happened since the El Niño summer of 1998.

“There is not only the danger of floods,” a state engineer told El Comercio. “Erosion could also endanger people living on the riverbanks.”

The rivers are rising due to heavy rainfall in the rural mountain provinces of Huarochiri, Canta, Oyon and Yauyos, which sit east of the metropolitan area at over 5,000 feet in elevation. All four provinces are forecast to see increased rainfall through Saturday.

Rains in Huarochiri have caused the closure of the Central Highway which accesses Lima from central Peru. At least nine trucks loaded with food were stranded, and Huarochiri officials have asked the national government to declare a state of emergency to quickly appropriate relief funds.

Torrential rains and flooding attributed to El Niño have killed at least nine and destroyed hundreds of homes and infrastructure throughout Peru.