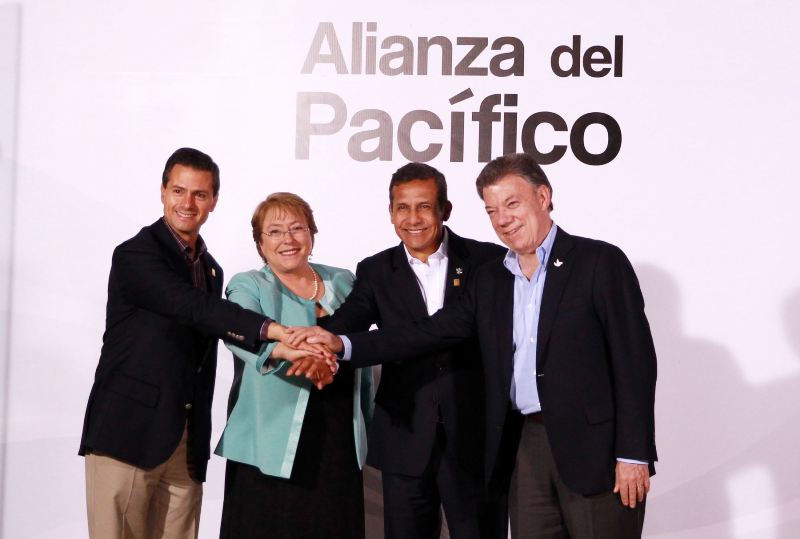 Officials from Peru, Chile, Colombia and Mexico have agreed to increased integration in capital markets, infrastructure, immigration and medicine.

The four member countries concluded their tenth Pacific Alliance summit today in Ica, where they signed the Declaration of Paracas. The agreement includes measures for the trade bloc which represents 38% of Latin American GDP to further collaborate in attracting investment, public spending, citizen migration, medical spending and more.

“In this context, measures will be implemented to recognize initial public offerings (IPOs) between the four countries. We will also look to implement measures aiming to widen the instruments eligible for trading across the member countries’ markets on different exchange platforms,” the agreement states.

This agreement also creates the Finance Ministers’ Council, which will work to promote capital movement between countries and attract more investment to the Pacific Alliance economy. The council will also look for ways to promote the MILA exchange to pension funds and international investors as well as coordinate tax regimes so investors are not taxed twice.

A prominent theme throughout the summit was improving infrastructure and public spending protocols at a time when the four export-based economies face slowdowns due to falling commodity prices after a decade-long boom. Peru has struggled to execute on domestic projects due to bureaucratic red tape and conflicting legislation and protocols.

In a speech to finance officials, trade regulators and business leaders, Peru finance minister Alonso Segura announced the creation of new investment vehicles for infrastructure projects in Pacific Alliance countries. To attract private capital however, further integration of legislation and execution is required.

“We have to have the same language. We are working on revision and standardization where possible in every area so investments are predictable and the rules of the investment game are reasonably similar,” Segura said.

Another focus of the summit was to improve citizen mobility between the bloc countries. Mexico agreed to eliminate the need for Peruvian and Colombian citizens to obtain visas before visiting, and all countries eliminated business visa requirements for member-country citizens for up to 183 days of unpaid work-related stays. The countries agreed to create an information exchange platform to share migratory data.

The summit saw the four countries lay plans to purchase basic medications as a bloc. When buying for a combined population of 217 million, the alliance can negotiate better prices and terms than each country would alone.

Other developments from the summit include formal forums to exchange information on infrastructure best practices and disaster risk management.

New amendments to the alliance charter aim to improve the international business environments of the cosmetics, telecommunications and e-commerce industries.

The agreement creates a mining technicians committee to promote the extraction industries. The agreement also founded joint commissions to improve education and social responsibility in the four countries.

The Pacific Alliance was created in 2011 between Peru, Chile, Colombia and Mexico to promote “the free movement of goods, services, resources and people.” The political and economic bloc is regarded as a business-friendly, pro-Western counterbalance to Latin America’s Mercosur and ALBA blocs.

Peru: The most important achievements by the Pacific Alliance (Andina)

WHAT IS THE PACIFIC ALLIANCE? (Alianza del Pacifico)

Shootout between rival unions kills one in Huaral