‘Pepera’ gangs on the rise in Lima 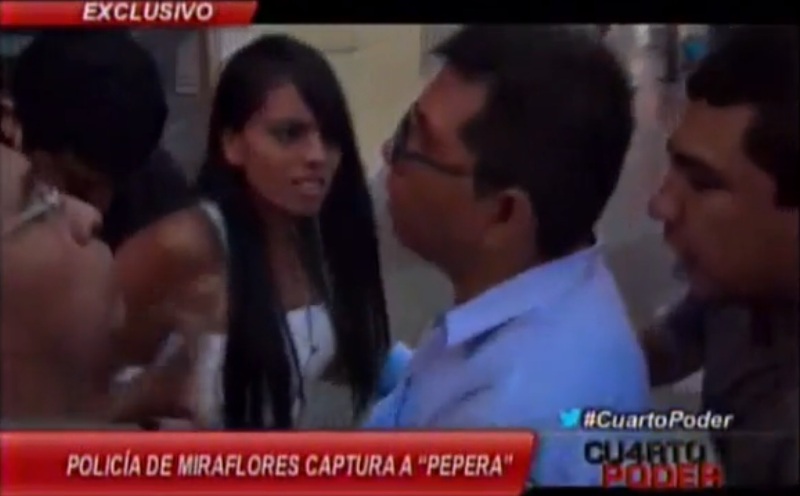 Teams of thieves that put victims to sleep with sedative drugs in order to rob them are on the rise in Lima.

In the first program, police arrest a girl leaving a Miraflores nightclub in the early morning hours with her victim, who looks to be under the influence of a sedative. Police also arrested her male accomplice. El Popular reports the team amassed over $150,000 in pepera robberies.

The second program examines the operations of the gangs known as “peperas,” a derivative of the Spanish word for seed, “pepa.” Young women are usually used to gain the trust of their victims in bars and nightclubs late at night. Over the course of the night, the women put clonazepam or other powerful sedatives into the men’s drinks.

Then the women convince the men to leave the bar or club for a place more private. The women often have a man waiting outside who poses as a taxi driver. He drives them to a hotel. Once they are in the rooms, the victims fall asleep and the women steal their cash, credit cards, cell phones and any other valuables.

The pepera assaults are especially dangerous because several cases prove the thieves show little discretion in administering clonazepam, a benzodiazepine used to treat seizures and panic attacks. Taken in high doses and combined with alcohol, clonazepam overdose can cause stroke or heart attack.

Last month two men were drugged in Los Olivos. One of them died of an overdose after the two were dumped on a street in San Martin de Porres.

Also in March a high school principal was found in Comas dead from a heart attack after having been drugged. When his brother called the victim’s phone, an unknown woman answered.

On April 8 in Villa Maria del Triunfo, eight bar patrons plus the owner were found unconscious after having been drugged. The thieves stole all their belongings plus the money from the cash register.

Sedative drugs are also used in sexual assaults. In an article that went viral in Peru last month, a father took his young daughter and her friends to a dance club. He escorted them in and sat at the bar before leaving them alone for a couple hours. After the bartender noticed him smiling at his daughter, he offered to drug her for $32. The father reported the incident to police, who in a search of the staff found sedative drugs on the servers and bartenders.

A spike in pepera gangs has also been seen in the city of Huancayo, where dozens of cases have been reported so far this year.