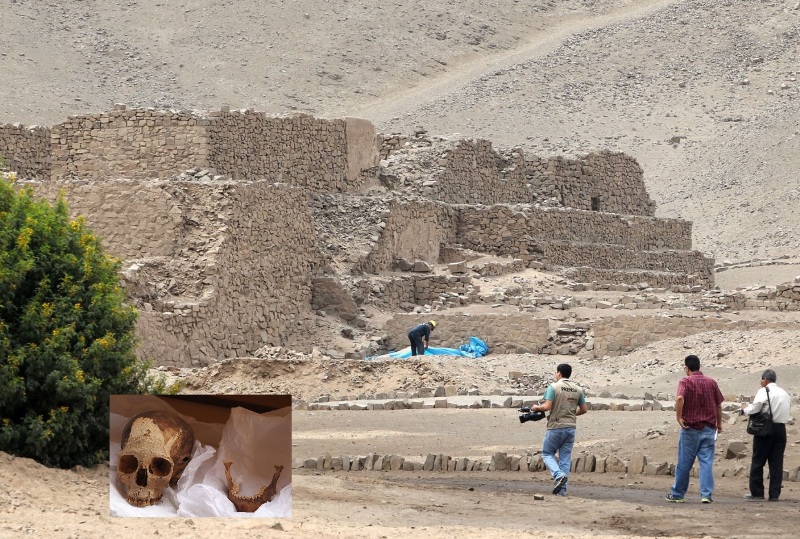 The skeleton was found beneath food residues which were estimated to be 3,500 years old, a few centuries after the construction of El Paraiso during the Pre-Ceramic Period.

“In completing the restoration of Building 1, we have found food products of the period – seafood, fish, agricultural products as well as the remains of a woman about 30 years old, robust, brunette, who apparently was dedicated to textiles,” Joaquin Narvaez, director of the El Paraiso restoration, told Correo.

Researchers believe the woman worked as a weaver because textile tools were placed around her body. Seashells as well as residues of seafood, legumes and corn were also found. The woman died from blunt trauma to the head, the first indication that the El Paraiso site was used as a burial ground, at least during the period the woman died.

Peru’s Pre-Ceramic Period between 3000 B.C. and 2000 B.C. was characterized by increasing size of sedentary populations which had not yet developed agriculture or the ceramic pottery required for cooking.

Dating back at least 4,000 years and as many as 5,000, the El Paraiso huaca is Lima’s oldest archaeological site. The 120-acre area features eight structures, the most famous of which is the 20-foot tall Building 1.

Located near the border of Callao’s La Ventanilla district, El Paraiso was the target of a 2013 land invasion in which settlers demolished and burned one of the site’s pyramids. Peru’s culture ministry and police dislodged the settlers until December 2014.