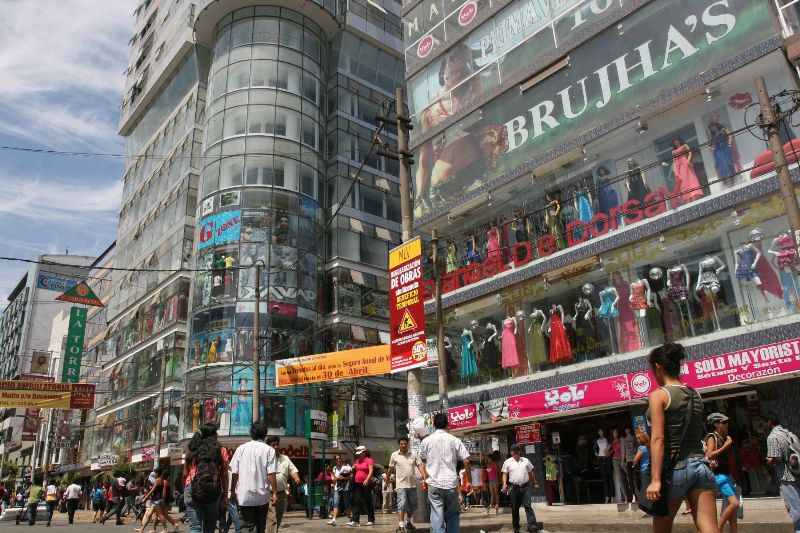 Over 200,000 jobs have been lost and another 400,000 are at risk in the storied garment district located in La Victoria. Peru’s clothing manufacturers cannot compete with cheap Chinese imports, which they say are being unfairly priced to squeeze out competition.

“Five thousand businesses have closed in the last 12 months,” Diogenes Alva, a trade group president who has worked in Gamarra for over 50 years, told El Comercio. “Gamarra has had three crises: the Velasco government, terrorism and right now. This is the worst.”

Posada explained that a CCL study of shirts from China sold in Peru and the United States found that the same garments were priced on average of four times more in the U.S., and as much as 883% more. While that does not meet the legal definition of dumping as defined by the World Trade Organization, Posada believes it warrants an investigation.

The WTO’s defines dumping when goods are sold in an export market at a higher price than in their home market. If the clothes being imported into Peru are bought at prices lower than in China, then Peru would be entitled under its free trade agreement with China to slap import tariffs on those products.

In 2013 Gamarra faced a similar crisis, and Indecopi responded by invoking anti-dumping statutes to tax imports on five specific product codes. In May 2015, however, Indecopi overruled its previous resolution and repealed all tariffs on Chinese textiles. According to industry experts, the removal of the tariffs prompted an avalanche of cheap Chinese clothes in Gamarra which have swamped Peru’s production.

El Comercio reports that from the first quarter to the second quarter of 2015, when the tariffs were lifted, all five textile categories saw marked increases in import volumes. Shirts and underwear saw the most modest increases with 25% and 39% respectively, while underwear and pants grew 77% while socks more than doubled.

Some industry analysts say the importers of Chinese textiles simply evaded those tariffs with falsified import documents and outright contraband.

Posada told Gestion that it is too easy for Peruvian importers of Chinese goods to appeal tariffs levied by SUNAT to have the tariff removed. He estimates that, in 99% of cases, the fiscal tribunal rules that SUNAT cannot determine the product’s true price and exonerates the tax.

In 2014 Chinese cotton began to replace Peruvian cotton, which is high-quality but expensive. Cotton production fell 70% in 2013. One source told La Republica that many cotton growers did not stop producing because of cheap competition from China, but to move on to higher profit crops.

At least 40% of the garments sold in Gamarra are made in China, while 50% of those made in Peru are made with Chinese cotton.

“Clothing can’t come in by the sack without protection,” President Pedro Pablo Kuczynski told concerned vendors during a campaign event in Gamarra during the 2016 elections. But he did not mention pressing for tariffs in recent comments after his visit to China this month.

“What do we need to do? We need to improve the brand and quality of the clothes and seek new markets,” Kuczynski told Andina. The president cited the economic crisis in Venezuela as putting downward pressure on prices of exports to South America. He touted lower taxes and less bureaucracy for small business.

A Semana Economica report from August 2015 implied that not all of Gamarra’s problems come from unfair competition from China. “Fast fashion” brands and the emergence of shopping malls in the low-income outskirts of Lima have reduced the appeal of Gamarra, which the report says could become “a mere fabric supplier” if it does not adjust its offering to the new market.

“The new government can implement anti-dumping measures on China, but that is not the solution,” writes fashion blogger Adriana Seminario in La Mula. She says Peru’s textile producers need to improve their value proposition and business practices.

“Some [companies] are betting on reinvention and better managing their business, not just production and sales, but they are not the majority. And yes, [international competition] will not decrease. More and more multinational brands will arrive, and the only solution for the sector will be to become professional.”

The United States this month imposed a 162.47% tariff on Chinese imports of a specialty fabric used in sports apparel due to dumping in a ruling by the Department of Commerce. They have also begun to tax certain steel imports. Peru’s Aceros Arequipa recently closed a manufacturing plant in Arequipa, citing dumping from China.